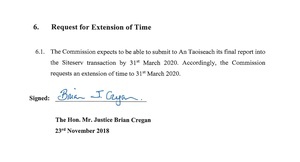 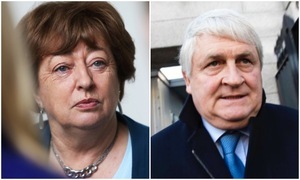 Request from Judge Brian Cregan for an extension for his inquiry into the sale of Siteserv; Social Democrats TD Catherine Murphy; businessman Denis O’Brien

Yesterday, The Sunday Business Post, reported that Taoiseach Leo Varadkar is refusing to give Judge Brian Cregan a 15-month extension for his inquiry into the sale of Siteserv and that he wants to know what the commission has found to date before doing so.

Judge Cregan’s request for an extension last week follows three other similar requests since the commission of investigation was set up in 2015.

The 2012 sale of Siteserv, to a company controlled by Denis O’Brien, Millington, is just one of 38 debt write-offs involving IBRC, formally Anglo Irish Bank, that Judge Cregan is tasked with examining. Siteserv is now called Actavo.

“The possibility of the commission of investigation, which is examining Siteserv and other IBRC loans sales, being scrapped entirely was raised at a meeting between the Taoiseach and opposition party leaders earlier this month. There are mounting concerns over the several missed deadlines and rising costs previously estimated at up to €25 million.

A Dáil vote would be needed to scrap the inquiry completely.

“If we simply accept that the task of investigating Siteserv is too big and complicated, then essentially we are being asked to accept that there is an entire cohort of people who are too big to touch. I cannot and will not accept that.”

“What concerns me about the commission is that the format it is following is akin to a tribunal of inquiry rather than a private investigation. There seems to be a highly legalistic approach.

“That is not what was expected. I myself said I did not want it to go on forever when it was set up. It will be five years. To say I am disappointed is probably an understatement.”

4 thoughts on ““I Cannot And Will Not Accept That””