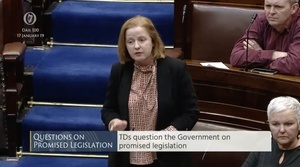 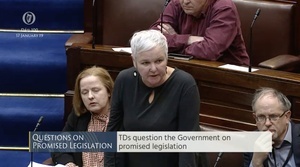 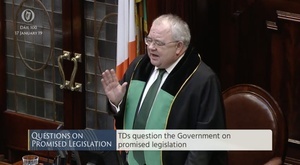 In the Dáil, during Questions on Promised Legislation – which were taken by Tánaiste Simon Coveney.

Solidarity TD Ruth Coppinger and People Before Profit TD Bríd Smith spoke about a pregnant woman Emma Connors, from Clondalkin, Dublin, whom they say has been refused a termination at the Coombe Women & Infants University Hospital in Dublin, despite two consultants certifying that she needed a termination for a fatal foetal abnormality.

During her contribution, Ms Coppinger said:

“At 13 weeks this woman went for her 12-week scan. They could clearly see at that point that the organs of the foetus were outside of the body. They brought her back a week later where that was fully confirmed when they got a better image.

“One doctor, her consultant, and then another consultant was brought in and he said ‘yes, this is a fatal foetal abnormality’. But then, a week later, it went to the board. And the board have overruled that.

“…This is about the law…Ceann Comhairle, if you don’t mind..this is about…this is the second….a main maternity hospital in the capital city of this country is refusing this woman her constitutional rights when two doctors certify what is very clearly a fatal foetal abnormality.

“And it would seem to me that it’s because of the chilling effect of criminalisation that maternity hospitals are acting in this way. And don’t forget the Rotunda is only enforcing the law to 11 weeks which the minister has written to them about.

“I’m asking you to get the minister to meet this woman today. She should not have to pay to travel [to the UK] which is what she’s talking about doing if she doesn’t have her constitutional rights affirmed.”

“I spoke to this woman last night. Emma Connors, she’s from Clondalkin. She’s pregnant on a much-wanted baby but she has been told by her doctors: you can go to England.

“Her words to me were: ‘this is not what I voted for, I have constitutional rights’. Now what are you Tánaiste [Simon Coveney] are you doing to do about it today? Not next week, today. She finds it hard to sleep, knowing that the condition, that her much-wanted child is in and she wants a termination. She’s entitled to it, this country voted for it.”

“The law is now clear in this area. The Government with the support of many in this house passed legislation in a way that was consistent with what we promised we would do in the context of the referendum that was taken.

“So the law is clear. But I agree with the Ceann Comhairle. I don’t think it’s appropriate, deputy, to raise a tragic case of somebody who is clearly under a lot of stress and this case needs to be dealt with appropriately by doctors in a hospital. Not on the floor of the Dáil.”

Ms Smyth told Mr Coveney the woman wanted it to be raised and she wanted to be named.

The Ceann Comhairle then said:

JUST IN: Coombe Hospital says in a statement that its Board and Directors “has no role whatsoever in certifying a termination of pregnancy”. It says reports that the Board had a role in certifying whether abortion could be carried out are “untrue”. 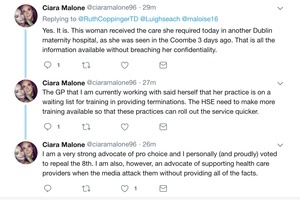 The Ruth Gets In The Way Of A Good Story

‘If I Was 20 Years Younger, I Wouldn’t Ask You, I Would Just Jump You’