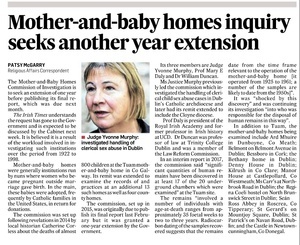 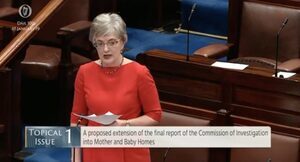 On Wednesday, January 9 last, the Religious Affairs Correspondent for The Irish Times Patsy McGarry reported that the Mother and Baby Homes Commission of Investigation was to seek an extension of a year before publishing its final report which was due in February.

The report took survivors, family members and supporters of people who lived in the Bon Secours Mother and Baby Home by surprise.

Following on from the report in The Irish Times, Broadsheet contacted the Department of Children and Youth Affairs on January 9 and asked a spokesman to confirm if The Irish Times article was correct; if it was, to set out the reasons for the seeking of an extension; to outline when the MBHCI made the request for an extension of Government; and to explain when the survivors/survivors’ groups were informed of the request.

Minister for Children Katherine Zappone’s department responded at 5.45pm that evening, essentially confirming The Irish Times article, but without answering the other specific questions, stating:

“The Commission of Investigation into Mother and Baby Homes has written to the Minister to seek an extension to the time frame for delivering its final reports. The Minister is considering the request and will meet the Commission next week to discuss it further.

“The Minister will then respond to the request in consultation with her cabinet colleagues.

“The Minister has given a commitment to interested parties to communicate any updates in relation to the Mother and Baby Home issue in as timely a manner as possible.

“The Minister will use existing channels to communicate
with interested parties, including survivors and their advocates in advance of any public statements on this matter.”

She also eventually confirmed, after being asked several times, that she had received the request from the commission in December.

“I ask the Minister to correct me if I am wrong, but my information is that the report was finalised in early December last and had been sent to the Attorney General pending transmission to the Minister and the Cabinet.

“I have also been informed that more files from the HSE have emerged which is why, potentially, a further delay is being sought by the commission.

“Survivors have been waiting anxiously for this report, as the Minister knows, and have been physically and emotionally shattered by the announcement in last week’s newspaper. It was a cold and calculated way to inform survivors and their families.

“Some survivors in their 70s and 80s were outside the gates of Leinster House yesterday. They were cold and they were angry. It was a disgraceful way to treat these ageing people. Their rights and justice are being denied. Will the Minister please explain exactly what is happening and set out why there was no early warning of the proposed delay? These people are losing confidence in the Minister and her Government and in the commission.”

“The request for a second extension from the commission is the last straw for many of us here and certainly for many of the survivors. The request should be refused.

“I am very curious to hear what the Minister’s attitude is and what level of warning she was given by the commission that this bombshell would drop a year almost after the last extension was granted. Many felt it was a step too far even then yet a year on, here we are.

“It is jaw-dropping to have a scenario in which four years later, we have had three interim reports comprising fewer than 40 pages between them. Of those interim reports, two sought more time while another focused on process. There have been no details and no findings and we must ask what in God’s name is going on in this gathering.

“As Deputy Joan Collins said, a suspicious person might wonder if things were being done in this manner so the community dies off.

“The fact that they had to hear this as they did via a newspaper leak has caused more insult to them. In many ways, the process is as important as the outcome. The process here has been an abysmal failure and it has retraumatised many of the survivors.

“I do not necessarily blame the Minister and certainly not before we hear what she has to say. I assume she got the information. It is important for her to tell the House when she got it and whether it was flagged. If it was not flagged to her, why did the commission wait until the 11th hour? If it was flagged and everyone knew, why was it done like this? This is devastating and we need clarity around it. My attitude is that the request should be refused. It is too much.”

“Has the commission of investigation asked for an extension of time? If so, when was the request made, how was it made and how long has the Minister known?

“…From day one, there was confusion and delay. The third report asked for extension of time. While it caused real upset then, people accepted the assurance that the report would be published in February of this year.

“…Subsequent to what we found out in Patsy McGarry’s newspaper report earlier this month, it was claimed on the Department’s website that “reports in the media did not come from this Department and the speculation contained in these reports is inaccurate”.

“What specific inaccuracies are there? Has an extension been sought? If so, when and why was it sought? I will await the Minister’s answer before I give my opinion.”

In her response, Ms Zappone said:

“The scope of the investigation is broad. It was acknowledged at the outset that the timeframe was ambitious. I received the fourth interim report in December 2018. I met the chair of the commission, Judge Yvonne Murphy, last week to discuss the request for the extension of the timeframe for the delivery of the commission’s reports and to ensure I had a full understanding of the progress to date and the basis for the additional time being requested.

“I know it is important for the commission to complete this sensitive and complex work as soon as possible… There can be no shortcut to finding the truth.

“The interim report is short. Contrary to what the Deputies have suggested, it is not a proposal. It grounds the request for an extension of the timeframe to deliver the three reports from the commission by one year.

“As the request constitutes a change in the terms of reference of the commission, it is a matter for the Government to consider the request in reflection of its statutory provisions. Government approval is also required to publish the report. With this in mind, I intend to bring a memorandum to the Cabinet.

“I have already circulated a draft of the memorandum to Government Departments. I hope to have it on the agenda next week for discussion. Ahead of the Cabinet meeting, it would not be helpful to speculate on what the Government will decide.

“I am conscious that the commentary on this issue in the media last week has caused distress and anxiety for those involved in this process. The coverage was misleading and did not originate from the Department of Children and Youth Affairs, as one of the Deputies mentioned.

“I reiterate my commitment to use existing channels to inform stakeholders of any developments in this area in advance of a public notice. I intend to make a public announcement following the Cabinet meeting to clarify the position for them….I will engage with stakeholders ahead of any public announcements. I hope to announce the details of the interim report as soon as possible.”

Ms Collins told Ms Zappone that she still didn’t answer her questions, namely when the commission requested an extension, if it was made at the beginning of December and, if it was, why weren’t the survivors not informed of this request before reading about it in The Irish Times.

Ms Daly said the essence of what was in The Irish Times article was correct – in so far as the final report will be delayed by a year.

She called for a report to be published in February outlining exactly what the commission has done to date, what needs to be done and a timetable of when the work will be done.

“I am afraid I am not so sympathetic. I am holding the Minister to account because her answer is not acceptable. When and how was she approached by the commission in relation to an extension? Why are the grounds for an extension not set out in the Minister’s reply? Why do we not have a copy of the report? The lines that should demarcate who is responsible for what are being blurred.

“The Minister referred to a meeting that took place last week. If there is a shortage of staff, as has been mentioned, we should know about that. If there is a reason the work cannot be completed on time, it should be made known to us in an open and accountable manner. That is the least we deserve in this Dáil so we can represent the people outside who have suffered greatly.

“The Minister knows well that I have attended many of the meetings. The anger on the ground is palpable. There was an absence of trust from day one. I went out on a limb to give the system a chance. Looking back on that, it was rather foolish. Since 2015, we have had nothing but delay, obfuscation and blurring of boundaries. The very least the Minister should do is tell us precisely when the request came and how it came. Regardless of the nature of the report the Minister has, she should publish it.”

It was after this contribution from Ms Connolly that Ms Zappone said the request was made in December.

“It is an interim report.

“There are procedures in terms of the establishment of the independent commission and the commission has requested an extension for the completion of its work. That request must be presented to Government, which must agree or not to it. Once that has happened, there will be the publishing of the report.

“That is the process and those are the procedures.

“I intend to do that at the next Cabinet meeting. When I have provided my Cabinet colleagues with the rationale for this, in addition to advising them of the discussions I had with Judge Murphy, which I sought as soon as I could subsequent to the presentation of that interim report taking account of the Christmas period, I will engage with my Cabinet colleagues and we will make a decision.

“We will let the survivors and those primary stakeholders know. I will publish the report and we will publish our decision. Those are the proper procedures. The Deputies will know then what is the rationale in that regard. I am happy to come back to the House and discuss those issues with them.

“Second, as the Deputies well know, this is an independent commission and therefore there are certain things I can and cannot do. The commission has made this request and laid out its rationale. I am able to talk and have talked to it about that – I have spoken of that – to more deeply understand its rationale in this regard.

“Third, as I mentioned in my opening remarks, I know the Deputies – who represent the people concerned very well – would acknowledge I also am aware of how awful and difficult this news is for these people to receive. I understand that. I will be able to provide the Deputies with the rationale with regard to the response, and my own response specifically to what they have said, next week after I have given that to my Cabinet colleagues.”

6 thoughts on “‘Delay, Obfuscation And The Blurring Of Boundaries’”