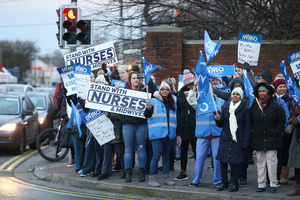 INMO trade union picket line outside Beaumont in Dublin on Wednesday, the first day of a planned series of one day strikes in support of better pay and conditions.

The government still has not made any serious proposals to avert further strike dates. (1/2)

Nurses and midwives do not want to be on strike for one minute, let alone several days.

But sadly we have been forced into this position by a government which refuses to listen.

We are immensely grateful for all the public messages of support. Thank you! (2/2)