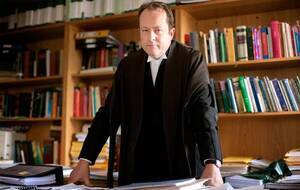 Outside the High Court, Dublin

A demonstration in support of Ed Honohan (top), Master of the High Court.

Mr Honohan had debt cases removed from him under a direction by the President of the High Court Peter Kelly.

A parasite dressed up as protector. A scavenger slicing the wounded for the bigger beasts to feed on. A profiteer of misery seeking the virgin bite of a fresh kill. A politician dressed in the clothes of the courts.

As Master of the High Court, Ed Honohan is meant to be a bad man. A malignant succubus. A facilitator of suicide. A team player.

Problem is, Ed is that rare thing in the corridors of power: Ed Honohan is a good man.

They call him an eccentric. That’s what they call good men these days. Eccentric. Some call him a maverick. Some claim this gentle, erudite, soft-spoken, Master of the High Court might even be a hero.

The Working Class have long known what a conveyer belt of dehumanisation the courts can be. Be a billionaire and watch the banks and the courts and the government roll out the red carpet for you.

They’ll make deals with you. Offer you contracts. Tell you to keep your taxes and write off hundreds of millions of euro for you. Be a bloke in a tracksuit and watch them stare with the blank-eyed hunger of hyenas on the hunt.

And these half-crazy half-dogs have acquired a taste for a different kind of delicacy now. They salivate as judges allow their client’s lies to destroy lives with impunity. They listen as a few more nails are banged into the coffin of our liberty.

From protected perches in foreign countries, parasitic vulture bosses instruct local-hire hyenas to move in on the vulnerable because both breeds of scavenger agree that no cold-blooded-kill has quite the warm-blooded payoff of the repossession of an Irish family home.

If that sounds extreme to you, visit the courts and witness for yourself the horror of people trying to save their homes. Witness the murderous malice the bailed-out banks and their capos have for the very people who bailed them out.

Bankers don’t bite the hand that feeds, they rip the entire arm out of the socket and beat you death with it.

And the judges tell you this is what modern justice tastes like. You’re told to swallow the force-fed bile of professional liars. Stand in line in a court ordained slaughterhouse.

Watch haunted, broke and broken people form an orderly queue to be put out of their misery, while the spoils of their lives are shared among their killers.

The basic function of law is to ensure moral, financial and physical protections are afforded to all citizens equally. The Association of Judges Ireland states that:

“The idea of law is that it embodies the core values of our society, creating rights and entitlements as well as duties and obligations. Nobody is above the law, no matter how wealthy or powerful they are.”

We already know that’s a fallacy. We have already witnessed the obscene consequences of our neoliberal Government. Policies are implemented. People struggle. People suffer. People die. And politicians get promoted.

Ed Honohan protects people by using the law. In the realm of the hunter and the prey, he doesn’t take sides. He simply holds bankers and their capos to the same standards that those parasites hold us to.

When the law is weaponised by highly-paid henchmen to protect their insatiable vulture bosses, Ed interrogates the bankers’ rabid exploitation of that law and finds a way to hand a few silver bullets back to the people.

He makes the law a two-way street. A little more balanced. Finally accessible to both sides. He brings equality to the law and uses it to do what the law is supposed to do. On behalf of the people, he faces down the vulture funds. And, for that, Ed Honohan has become the hunted.

Countless more will need the help of a good man like Ed Honohan in the future. Some of those people might be you.

But a judge has taken it upon himself to prevent Ed Honohan from giving you that help. Why would a judge impose such obscene censure on a fellow servant of the public A judge renowned in the past for his attempts to recognize social and economic rights. A judge due to retire in a year or two.

Ed Honohan is trying to protect vulnerable people. And he is doing it better than anybody else in the courts. In a culture where pretenders, poseurs, and politicians fail upwards, Ed Honohan is a proud servant of us, the people. Nobody is quite sure, anymore, who some of these judges might be servants of.

A good man like Ed Honohan wouldn’t be made Master of the High Court today. Fairness and decency and dignity don’t sell in this era of every man for himself and to hell with the vulnerable.

We pay lip service to mental health but, let’s be honest, there is nobody more despised in this country than people who need our help. They are weak. They need to be cut off like the cancer that they are.

They need to be tortured and sacrificed to the banks because only then can the strong survive. Only then can the banks and the judges and politicians go back to rolling out the red carpet for their billionaire buddies flying high above the faulty radar of the law.

Another eccentric Irishman, Edmund Burke is purported to have said, “The Only Thing Necessary for the Triumph of Evil is that Good Men Do Nothing.”

But what happens when Good Men do something and get forcibly stopped?

And a long list of other eccentrics whose legacies are bled dry every day by our governments and tourists boards and arts administrators in the peacock pretense of national pride.

Some of today’s eccentrics include nation-altering men like John Hume and Maurice McCabe and life-saving women like Christina Noble and Debbie Deegan.

Those brave nurses and midwives fighting for a better future are probably a little left-of-center too. And then there’s that gentle, curious, dignified man who sits in a stuffy little courtroom in Dublin, diligently working for vulnerable people betrayed by a court system increasingly intent on facilitating corporate theft.

That’s why we call good men eccentric. Decency has been relegated to the realm of the eccentric. A label used to dehumanize the most humane. Nobody calls evil men eccentrics. They call them politicians. And bankers.

Somehow these morons have taken the reigns of our national destiny. Mediocrity dressed itself up as leadership and demanded its day in the Dail. And we allowed the psychopaths to stay. To take over. To do billions of dollars worth of dodgy deals. To give hundreds of millions of euros of tax breaks to vulture funds.

To create a government-run whorehouse where the Johns get to screw the clients to death for free. But what if they’re not morons?  What if these psychopaths know exactly what they’re doing? What if all this is simple treachery dressed up as policy? Murder dressed up as austerity. Democracy dressed up as Goldman Sachs.

As our government uses the courts to facilitate the moral, ethical and economic rape of our people, hustlers, card sharks, and snake oil salesmen play politics with our lives.

Poseurs and liars on both sides feign compassion for photo shoots then go right back into the Dail bar and raise another twenty glasses to the con that is our country.

There is no rise of the right. There is only the abject failure of the left. Most politicians have the principles of a pimp. The law means nothing to either side.

What is happening is not tax avoidance. It’s tax evasion. It’s theft. It’s government facilitated fraud. It is treason. When our courts take instruction from vulture funds, our laws die.

When our politicians take instruction from Goldman Sachs, our democracy dies. When good men and good women take treasonous betrayal from government, our nation dies.

But, when all this horror becomes too much for us to comprehend, we must never forget that men and women are fighting to bring decency, and honor and nobility back to this country.

We must never forget that a quiet, diligent, eccentric Irishman is sitting in his stuffy courtroom and studying ways to use the law to defy Goliath.

We must never forget that a good man, who has demonstrated the real meaning of compassion, must be allowed to continue, for all of us, because, in a snakepit of liars, Ed Honohan, Master of the High Court, is profound proof that the principles by which you do anything is what truly matters.”

A petition in support of Ed Honohan can be signed here.

Summary Justice And YOU