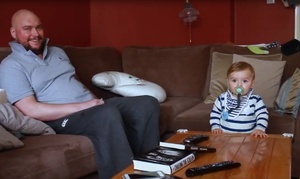 I am an Irish filmmaker based in London. I grew up in Dublin with a great group of friends with who I played sport, made music, and watched movies.

One of those good friends was Christopher Byrne, or ‘Git’ as a lot of Christophers are known in Dublin (for reasons nobody can quite agree on).

Chris was a gregarious character who was lucky enough to find and marry Caroline, and their son Harry was born in the autumn of 2014.

Sadly, just weeks later Chris was diagnosed with an aggressive brain tumour and despite several operations and amazing care from the Irish medical system, he passed away in March 2016.

A few months before my friend died, I interviewed him on camera about his life – his regrets, his legacy and his view on mortality.

This 90-minute chat is the genesis of this film. Around his two-year anniversary, I was ready to make a film not just about my friend dying, but also about the broader societal attitudes to death.

Losing Chris left an indelible mark on his friends and family and we want to examine some of the major questions that arise when we encounter death and consider our own mortality.

We are an independent operation, and to date our dedicated crew have worked tirelessly for hundreds of days for free and I have self-financed all essential costs such as transport, equipment and catering.

This is the ultimate passion project. But to finish the film we need to hand it over to a professional editor and someone who did not know Git personally, so they can edit the story objectively.

I know there are an infinite amount of good causes out there and a lot more front line, pressing needs but if you can contribute in anyway to getting this film finished please help out even a share on would be great.