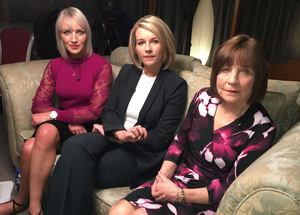 Clodagh Hawe’s mother Mary Coll (left)n and sister Jacqueline Connolly with Claire Byrne after speaking publicly on Monday night about the murders of Clodagh Hawe and her sons, Liam, Niall  and Ryan (6)  their husband and father, Alan Hawe, subsequently took his own life.

The Minister for Justice is to establish independent research into family homicides.

The announcement came after what he described as a lengthy but satisfactory meeting with the family of Clodagh Hawe today.

Mr Flanagan said he has to consider the terms of reference of such research, but that he has agreed to an independent chair.

The study is being carried out to establish if special protocols or legislative changes are needed in cases like this.

The person carrying out the research will meet with Clodagh Hawe’s family, as well as other similarly affected families.

Related: The War At Home

“Wrong On So Many Levels”