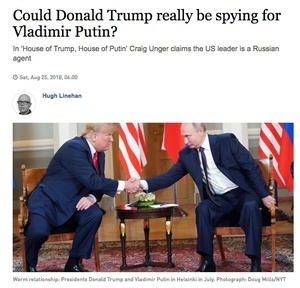 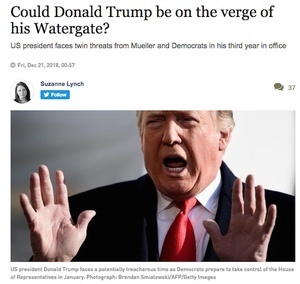 Tin-foil wrapped coverage of alleged Trump/Russia collusion in The Irish Times from last August (top) and last December (above).

A short two-minute video for those of you in the media pitifully insisting that no media reckoning is needed and journalists performed beautifully, soberly and responsibly throughout this whole saga: pic.twitter.com/PF5s2kTcYA

“Russiagate” has been a news media obsession since Trump’s victory in November 2016.

The nonpartisan Tyndall Report pegged the total amount of time devoted to the story on the evening newscasts of ABC, CBS and NBC last year at 332 minutes, making it the second-most covered story after the Senate confirmation hearings of Supreme Court Justice Brett M. Kavanaugh.

According to a count by the Republican National Committee released Sunday, The Post, the New York Times, CNN.com and MSNBC.com have written a combined 8,507 articles mentioning the special counsel’s investigation.

The cable news networks, particularly CNN and MSNBC, have added hundreds of hours of discussion about the topic, too.

The story undoubtedly was an important factor in shaping voters’ perceptions before the 2018 midterm election, in which Democrats won control of the House.

But the conclusion of the inquiry has put a question once hazily debated into sharp focus: Did the mainstream news media mislead?

36 thoughts on “I’m Gonna Set It Straight, This Watergate”