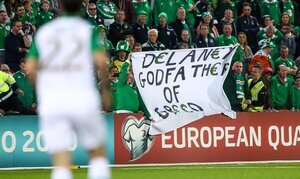 At the Ireland V Gibraltar match in Gibraltar at the weekend

Irish football fan Zino Kelly responded to an article in today’s Times Ireland edition which claimed some football fans are planning to hold a protest at the Ireland V Georgia match in the Aviva Stadium in Dublin tomorrow night.

The report said the protest will involve people throwing tennis balls onto the pitch.

But Mr Kelly claimed the allegation that people planned to throw tennis balls was from the “FAI propaganda machine”.

“It [the protest] will be interesting to see but it will definitely not tennis balls. Tennis balls, you know that’s trouble. I’d say you’d have to get on to the communications’ officer in the FAI to find out why, why that’s made the papers.

“Because it certainly didn’t come from supporters. And I’ve never heard of tennis balls at a match in Ireland before. So I think that’s a matter for the FAI to answer.”

“For the last five years they’ve [FAI] been heavy handed – especially in the South Stand of Lansdowne Road and I think this is an excuse, when all the limelight is going to be on them tomorrow night.

“I think it’s a big excuse to continue that heavy-handedness by their stewards.”

Mr Duffy pointed out bags are normally checked at games as a matter of security.

“They are indeed. But it’s a bit different when you go down to the singing section on the South Stand and there is, you know, there’s heavy searches and if you compare that to if you’re going to the West Stand and East Stand, there’s no searches.

“And this all stemmed from a protest 2014, when we were playing against the USA.

“…since then it’s always been more prominent in the South Stand.”

Mr Kelly also said he won’t return to watching Ireland play a home game, until John Delaney leaves the FAI “and indeed the whole board”.

“They have so many questions to answer.”

When he was reminded that Mr Delaney stood down from his role as CEO [but will take up the new role of executive vice president], Mr Kelly said:

“He’s still on their payroll and he still has as much, as far as we know, we don’t know how much influence he has, but to me, this is a made-up role and he is still the most powerful man in the FAI.”