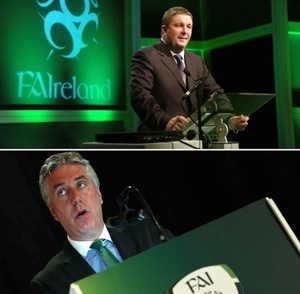 “What is very strange is that the entire arrangement with the €100,000 loan … that it wasn’t disclosed, but particularly the fact that he [John Delaney] tried to seek an injunction [against the Sunday Times] to have it suppressed and to have the article suppressed.

That raises an awful lot of questions. It’s very unusual. This is an organisation that has extensive banking facilities, so should be in a position to go to its bank for a short-term loan. It’s just very strange.

The very interesting thing that we should all remember here is that the Football Association of Ireland is a publicly funded body so this is taxpayers’ money.

It should be disclosed immediately through Sports Ireland, through the department – through Shane Ross’s department.

To actually do something that appears to be hiding a transaction and then appearing later on not only to hide it, but to try to have the matter obliterated … by having a court injunction.”

Namely that, since 2016, it paid €3,000 a month to rent a Wicklow property from former RTE broadcaster Grainne Seoige for Mr Delaney and it also paid just under €3,000 a month for him to live in Malahide, Co Dublin during a separate period…

“FAI workers are asking for an explanation of why they had pay cuts at a time that the organisation began paying rent for chief executive John Delaney.

…Today, SIPTU Sport Sector Organiser Denis Hynes said: “FAI employees were enduring reductions in salary of between 10% and 15%, which were implemented on what was meant to be a temporary basis in 2012.

“This issue has particularly incensed our members because when the cuts in their pay were originally imposed, John Delaney stated that he was taking a similar reduction in his earnings.

“However, it would now seem to be the case that, in 2016, the FAI decided to reimburse the reduction in its CEO’s salary through a payment in kind on a large property.

“Our members had to wait until January of this year to receive the final restoration of their pay after long and difficult negotiations between management and SIPTU representatives.”

19 thoughts on “Strange And Unusual”