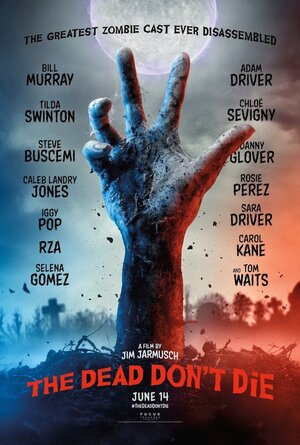 1. Jim Jarmusch, one of the most significant US indie directors of the past four decades, returns with undoubtedly his most audience-friendly film to date. That’s not to say he hasn’t been accessible in the past, but the wacky slapstick and record-scratch punchlines on show here are quite far removed from the austere drama in the likes of Dead Man (1995), Ghost Dog: The Way of the Samurai (1999) or The Only Lovers Left Alive (2010).

2. The Dead Don’t Die is Jarmusch’s second film with Adam Driver, following 2016’s light-hearted drama Paterson. It’s also his second film with Bill Murray after Broken Flowers (2005) and Tilda Swinton (The Only Lovers Left Alive), plus he has worked with Tom Waits and Iggy Pop on several occasions over the years, most notably in 2003’s Coffee and Cigarettes – overtly referenced here by undead, coffee-craving Iggy Pop.

3. It’s always pleasing to see Tom Waits on screen; he’s doing a lot of acting at the moment with roles in Robert Redford’s The Old Man and the Gun as well as The Ballad of Buster Scruggs last year; some new music would be even better but it’s good to know he’s out there either way.

4. With The Twilight Zone currently making its TV comeback, you can’t help notice that opening voiceover aping Rod Sterling’s ominous voiceovers from the original 60s TV series. Take it as another attempt to help audiences make sense of 2019.

5. “Ghouls” is why Adam Driver is one of the best in the business at the moment.

6. We’ve seen plenty of zombie comedies pave the way for this one, of course, most notably Shaun of the Dead (2004) and Zombieland (2009), but the sardonic, deadpan tone here is one that can only come from an indie type like Jarmusch, and will offer something new to the genre.