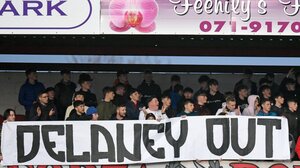 This is what happens when you have a banner saying “Delaney Out”. #FAIOireachtas pic.twitter.com/AKXhyopZnd

O’Brien – who was part of the Oireachtas Committee that met with the officials of the Association on Wednesday – was escorted out of the ground by Gardai…. ‘I Think Most Irish People Would Say Fair Play To Him’