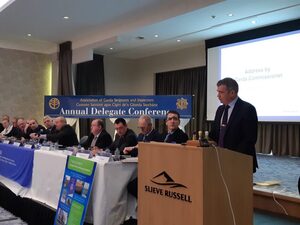 RTÉ’s Morning Ireland broadcast an interview its crime correspondent Paul Reynolds carried out with the Garda Commissioner Drew Harris at the AGSI conference in Cavan.

It followed Mr Reynolds reporting that one of An Garda Síochána’s members is being investigated by the National Bureau of Criminal Investigations for allegedly engaging in “outside security work”, which is not permitted.

Mr Harris said he couldn’t speak of the specifics of the case as the matter is being investigated.

“But you are known and have taken a very strong stand on discipline. I mean, and there has been criticisms of your stance at this conference [AGSI] of the fact that even though allegations have been levelled against individuals, that have not been proven, you have prevented people from being promoted.”

Mr Harris said each case is examined on its merits and he’s examined a number of cases and people have been promoted.

He said others have been delayed until he has received more facts. A Minute Past Midnight 4 thoughts on “No Alarms And No Surprises”