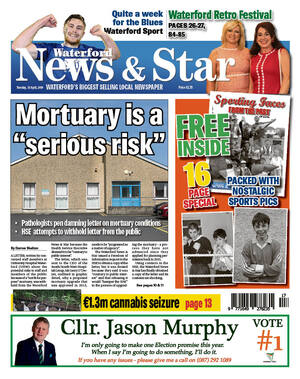 The South South West Hospital Group’s statement to the media last night about the mortuary at UHW was ill judged to say the least. It’s also inaccurate and, to be frank, lies. For the full – and real – story, see this week’s @WaterfordNS

Last night the South/South West Hospital Group issued a statement saying it had “no evidence” to substantiate claims made about the University Hospital Waterford’s mortuary.

It follows the claim made by four pathologists last October that the conditions at the mortuary are so bad “most bodies lie on trolleys in corridors, often leaking body fluids onto the floor”.

The hospital group also said it had not received any complaint from the public or any staff member about the mortuary and that, since last week’s report in the Waterford News and Star about the pathologists’ claims, just one family had queried the matter.

The claims made by the pathologists were contained in a letter which they wrote to the CEO of the hospital group last October.

Waterford News and Star journalist Darren Skelton sought to obtain the letter under the Freedom of Information Act but was refused.

He later obtained it through other means and printed its details last week.

“The SSWHG and University Hospital Waterford currently have no evidence that would substantiate the claims contained in recent correspondence.

“The S/SWHG and UHW have been fully aware of the challenge associated with the mortuary infrastructure for some considerable time.

“The development of a new replacement Mortuary for UHW has been on the HSE Capital plan since 2014 and planning permission for the proposed new Mortuary was received in 2016.

“In addition, efforts to resolve the matter resulted in a replacement mortuary for UHW being placed on the HSE’s capital programme. Approval to proceed to tender was received in March, 2019. The current programme for this will see the new facility being delivered within approx. 2 years.”

The Waterford News and Star has responded to last night’s statement in today’s print edition of the newspaper.

Previously: The Dead Can Wait

Taoiseach Leo Varadkar says there’s no evidence to back up claims that dead bodies were left decomposing on trollers at University Hospital Waterford pic.twitter.com/wuWYNlbUNd

1 thought on “‘Ill-Judged And Inaccurate’”