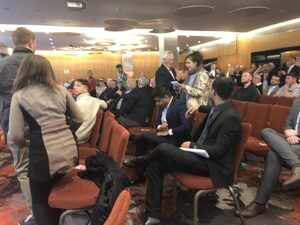 At the Clayton Hotel in Cork city.

Fine Gael adjourned a public meeting it was holding about directly elected mayors in Cork, Limerick and Waterford for 15 minutes before resuming.

This was due to members of the Connolly Movement Branch protesting at the meeting.

Their protest began with a member calling for a minute’s silence for two homeless men who died in Cork recently.

The action follows the most recent figures from the Department of Housing showing that 10,305 people accessed emergency accommodation in the final week of March.

Homeless charities have put the true homeless figure at 15,000 while Fr Peter McVerry told the Women in Media conference in Ballybunion, Co Kerry last weekend that he believes 500,000 people in Ireland are in a “housing situation causing them serious distress” while 40,000 mortgages are in arrears.

Jennifer Bray, in The Irish Times, who was at last night’s meeting in Cork, reported that, after it resumed, Taoiseach Leo Varadkar told those present:

“I think no matter what political party you come from or what your political views, we should all be committed to democracy and freedom of speech and trying to shout other people down and trying to shut down their meetings is profoundly anti-democratic.”

“It goes against the basic principle of free speech and is untrue to what happened in 1916 when people fought for our freedom and independence and it is untrue to all of the efforts of our founding fathers. We are a democracy and that allows people to speak freely.”

“Taoiseach Leo Varadkar and his Cabinet will undoubtedly have expected some soft focus PR during their trip to Cork City, with political strategists eyeing up the chance to win over some badly needed rural support when the visit plans were first unveiled.

“But, despite their best intentions, the day-long journey to the rebel county has if anything provided ministers with a short, sharp slap in the face reality check of the problems facing the coalition as they bid to keep voter support in place nationwide in the weeks – and months – to come.”

Previously: ‘A Time To Be Disruptive’