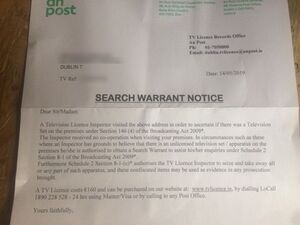 The above letter was delivered to a resident of Dublin 7.

A Television Licence Inspector visited the above address in order to ascertain if there was a Television Set on the premises under Section 146 (4) of the Broadcasting Act 2009*.

The Inspector received no co-operation when visiting your premises. In circumstances such as these where an Inspector has grounds to believe that there is an unlicensed television set/apparatus on the premises he/she is authorised to obtain a Search Warrant to assist his/her enquiries under Schedule 2 Section 8-1 of the Broadcasting Act 2009*.

Futhermore Schedule 2 Section 8-1-(c)* authorises the TV Licence Inspector to seize and take away all or any part of such apparatus, and these confiscated items may be used as evidence in any prosecution brought….

This is new. A notification of a search warrant for no TV licence. I haven’t, and nobody I know has, ever seen this before. It’s weird. I sent them a strongly worded ‘come around and look around and go fupp yourselves’ as I don’t own a TV at all. 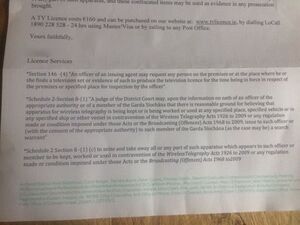 *Section 146 (4) “And officer of an issuing agent may request any person on the premises or at the place where he or she finds a television set or evidence of such to produce the television licence for the time being in force in respect of the premises or specified place for inspection by the officer”.

*Schedule 2 – Section 8 (1) “A judge of the District Court may, upon the information on oath of an officer of the appropriate authority or of a member of the Garda Siochana that there is reasonable ground for believing that apparatus for wireless telegraphy is being kept or is being worked or used at any specified place, specified vehicle or in any specified ship or other vessel in contravention of the Wireless Telegraphy Acts 1926 to 2009 or any regulation made or condition imposed under those Acts or the Broadcasting (Offences) Acts 1968 to 2009, issue to such officer or (with the consent of the appropriate authority) to such member of  the Garda Siochana (as the case may be) a search warrant.”

*Schedule 2 Section 8 (1) (c) to seize and take away all or any part of such apparatus which appears to such officer or member to be kept, worked or used in contravention of the Wireless Telegraphy Acts 1926 to 2009 or any regulation made or condition imposed under those Acts or the Broadcasting (Offences) Acts 1968 to 2009.

28 thoughts on “A Licence To Search?”