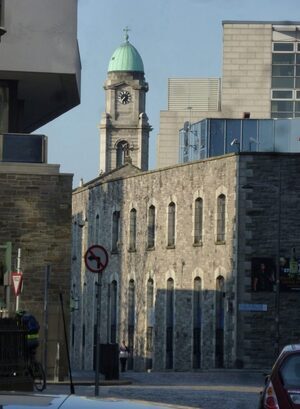 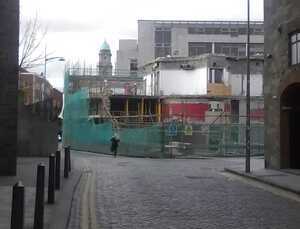 The former Irish Distillers Building in Smithfield, Dublin 7, before (top) and after (above) demolition

A significant heritage building in the Smithfield area, Dublin, has been demolished in contravention of planning permission conditions.

Permission was received by Linders of Smithfield in 2016 for construction of a substantial office development on a large site running between Smithfield and Bow Street, to include incorporation of part of the stone unlisted former Irish Distillers building.

Under the planning permission, the two-storey Bow Street elevation of the building, plus two further sections wrapping around the corner onto New Church Street and the Luas line, were to be retained and incorporated within the new office development.

The applicant, Linders of Smithfield, undertook unauthorised demolition of the building in April, maintaining afterwards that a safety issue had arisen with the stability of the building.

There is an established procedure for retaining a historic façade, which was not followed.

Modern building conservation practice allows easy remedy of any stability problems arising in historic structures, through provision of structural support prior to demolition.

Demolition of the structure, required to be maintained as part of the planning permission, is unjustifiable.

Dublin City Council is requested to invoke the provisions under planning legislation to levy an appropriate substantial financial penalty, reflecting the gravity of the unauthorised action taken by Linders of Smithfield.

Smithfield and Bow Street are within a designated Conservation Area under the Dublin City Development Plan 2016-22.

The former Irish Distillers building was a well-regarded office scheme, having been sensitively converted from an old spirits store in the 1970s.

It is part of a distinctive stone-warehouse streetscape on Bow Street, along with great limestone elevation of the former Jameson Distillery.

It says that regeneration “must recognise the distinctive and unique character of the local area and must build upon it.”

26 thoughts on “‘Unauthorised And Unjustifiable’ Demolition”