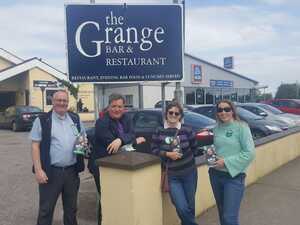 Tomorrow is a day I’ve been working towards for the past six months. It is my fifteenth election.

While I’m experiencing the usual feelings of uncertainity, married with a somewhat obsessive need to do more, this is an election campaign that seems different.

Reactions on the doors have been more friendly. Angry responses have been fewer, and more about disillusionment with politics in general.

I have chosen to do so from a less traditional, less prominent place.

Politics has been a huge part of my life, but it has not been my life itself. It has dominated, affected me too personally too often, but there are more important aspects of my life involving my family, in particular, that I hold more dearly.

As precarious as politics can be, there are easier ways to navigate its often choppy waters. Who we choose to associate with, how we choose to act and what we choose to say, are the main detriments of political ‘success’.

Conventional wisdom is that you should choose to associate with those who have, or are near power. Once associated you should keep your head down. Do nothing that will rock the boat. Say or do nothing that hinders career prospects.

Not my choices, because of which my political journey has been more rollercoaster-like than it otherwise might have been.

I don’t regret any of it, even if there many things I wish I had approached differently.

What sustains me with these interests? What encourages to keep going?

Watching my colleague Saoirse McHugh perform so brilliantly in an European Elections television debate onTuesday night, has helped crystalise those questions for me.

I also have a daughter named Saoirse. They are both around the same age, half that of my own. I am reassured that the path I have followed will be travelled by others, certainly more assuredly.

I have seen myself as a pragmatist in politics. I have been involved in compromise in attempts to achieve incremental change. These are important political tools but they are, and should remain, secondary tools.

Passion should be the prime motivator in politics. Saoirse McHugh is showing that in spades. Her performance has bolstered my confidence and has hardened my resolve.

At a time when the very idea of a future for our planet is being compromised, never has this passion been so needed.

An increase in public concern surrounding our climate emergency may see more Green representatives being elected.

Hopefully so. However, even if raised expectations cannot be met, the Greens as a political party will have benefited enormously from this election campaign.

The performance of Saoirse McHugh is helping the party renew its soul. Collectively we will face future challenges more convinced we are pursuing the right approach. Our confidence re-established that we can succeed.

I’m more than happy to stand behind a new generation of torchbearers. Their energy giving more of us renewed energy. Their passion helping us to remember the commitment that sometimes we have misplaced.

I am honoured to continue to be a part of this process. I would be privileged to serve in whatever way the public decides.

Dan Boyle is a former Green Party TD and Senator and is standing in the Local Elections for the party in Cork tomorrow. His column appears here every Thursday. Follow Dan on Twitter: @sendboyle

Wednesday: ‘Go On Dancing With The Stars If You Want The Attention’