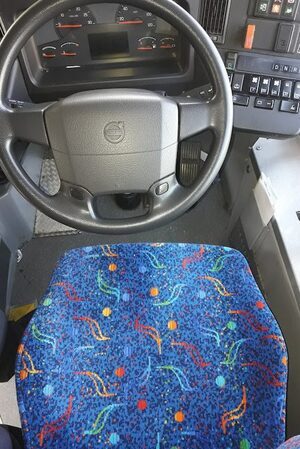 The seat in the SG, the most common model across the Dublin Bus fleet of 1,014 buses

Ten recent drivers’ signing-off sheets, nine from between February to June 2019 and one with an unclear date, mention complaints with seats, and the cushion in particular.

These sheets are filled in when a bus driver reports a problem with a bus and are given to the depot inspector or relief driver.

“Bottom of seat unwinding,” says another.

“No support on left hand side of seat,” says a third.

The majority say the left side of their seat cushion has worn down. “Drivers’ seat very hard to sit on,” says one. “Leg getting painful in back.”

The seat problem doesn’t seem consigned to one model of bus. The signing-off dockets, show drivers were steering a few different models: SG, GT, and EV.

Some Dublin Bus Drivers Say Their Seats Are Making It Painful to Work (Aura McMenamin, The Dublin Inquirer)

You Wait Around For Ages

Meanwhile, On The Number 14