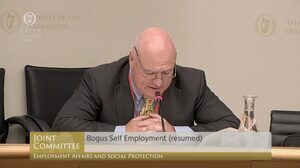 Some women pilots [working as self-employed contractors] in Irish-registered airlines are being told they have a choice: terminate their pregnancy or terminate their employment, the president of the Irish Air Line Pilots’ Association (IALPA) has claimed.

…Capt Cullen told the Committee on Employment Affairs and Social Protection that many pilots were afraid to speak up.

Would You Believe It?