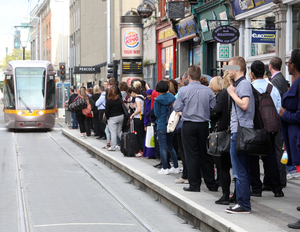 But what about the mouth breathing women?

I’m more concerned about the people who don’t brush their teeth and insist on breathing through their mouth instead of their nose.

I actually got up and moved seat when a woman and her friend whose conversation not only nearly burst my eardrums, also nearly knocked me out with the nauseating smell from her unclean mouth.

Also women putting on a tonne of body spray is only creating a different problem. A plume of different artificial smells each so different from the next.

As someone with a sensitive nose this usually makes me sneeze.

Yesterday: Hum ON The LUAS

Laying Down Some Tracks

Whose Luas Is It Anyway?