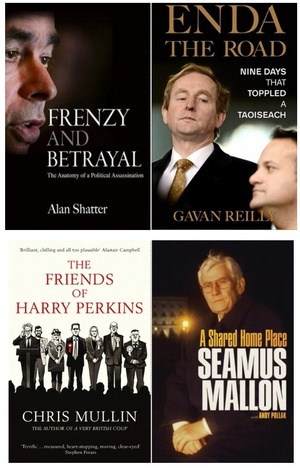 Derek Mooney (above) and some of his Summer reads (top)

I have the hotels and flights booked so it must be time for my annual summer political reading list. Below are some suggested titles along with short reviews of books that should be of interest to those who follow politics.

As with the previous two lists I have done for Broadsheet the books are mainly factual, though this time I have tried to go for less heavy reads than past years.

The list is broken up into two parts (concluding tomorrow) and in no particular order, though it does start with books with a more domestic focus.

Feel free to disagree with any of my choices in the comments section below and maybe suggest what books you have packed or downloaded for the summer break.

Enda the Road: Nine Days that Toppled a Taoiseach By Gavan Reilly

This first one is no-brainer (I know there’s an obvious joke here, but I am a kindly soul in the summer, so will pass on making it). I simply cannot recommend Gavan’s book highly enough. It is not just superbly well-written, it is also well researched and offers a balanced yet pacey and entertaining telling of the final days of the Kenny leadership. Essential reading for anyone seriously interested in Irish politics, it is also a good intro for those who want to get to know more about it.

Frenzy and Betrayal: The Anatomy of a Political Assassination by Alan Shatter

While the dustjacket blurb describes it as a “compelling, dramatic and unique insight into the most shocking series of corruption scandals to rock the Irish political system in decades” the pages in between the covers tell the story of a smart and savvy politician who perhaps over estimated his skillset and contributed as much to his demise as his detractors.

Nevertheless, Irish ministers are not in the habit of writing about their time in office in this level of detail, so this is an important and rare insight into how one of the most important and guarded departments of state operates.

This book is part memoir, part manifesto and written with the help of Andy Pollak. While Seamus Mallon appears to be telling the story of sad and tragic life lived in the most difficult times in Northern Ireland he does this to offer the background to the book’s real intent: a proposal for how both traditions on this island can manage to live together in this shared home place and space.

Not for the first time in his political career Mallon takes the less easy road and sets the challenge to those of us in the majority on this island to make the changes necessary to accommodate the other.

The Friends of Harry Perkins by Chris Mullin

One of the few works of fiction to make it on to this list, this sequel to Mullin’s bestselling A Very British Coup could be said to offer a better sense of how political life in post-Brexit Britain might turn out than some non-fiction works.

In the highly entertaining and gripping A Very British Coup, Mullins – a former Labour MP and junior Minister under Blair – chronicled the entrenched institutional opposition faced by his fictional prime minister, the far left Harry Perkins, as Perkins attempts to cope with the economic and industrial chaos that engulfed Britain in the 1980s.

Thirty-five years on and with Britain facing another social and economic crisis, Mullin has created a new character, Fred Thompson, a former Perkins aide and his successor as MP, and we get see the difficulties besetting a near-future Britain through his eyes.