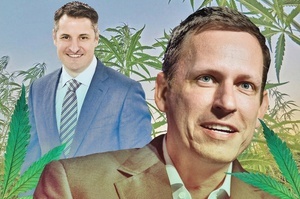 On July 11 the announcement was made; meet Tilray (TLRY) your medical cannabis supplier, imported for distribution and sales, and dispensed in oral solution form on prescription.

Neither the bold Minister nor the HPRA made any announcement, nor are any details available at either’s web site detailing the decision process or the criteria applied that signed off this import licence.

Instead You and I, Patients and their Families, and everyone else must rely on Tilray‘s press releases and tweets; and since Tilray is a PLC (most of the time) their communications tend to be investor focused, and primarily aimed at nervous bankers and upstart analysts.

This should not surprise since Tilray’s CEO, Brendan Kennedy tBrendan Kennedy, is the same man that at the start of the equity fund that backed Tilray to get out of the ground.

Privateer Holdings as they say on the tin are equity specialist fund focused on Legal Cannabis start-ups, so Silicon Valley was as good a place as any to grow from.

Especially as the source of their own funds, the man behind their own curtains; Peter Thiel is no stranger to that community himself.

I can totally identify with Tilray communications policy mirroring the tone of a private equity fund.

But this is not how you inform the medical community who are required to accept responsibility for prescribing amongst other things, and as duly noted by the Irish Medical Journal themselves, and as pointed out here.

Likewise, for patients and their families and carers.

Is investor and analyst focus communications all anyone needs to know about the medicine being imported, without competition or alternatives for clinicians to treat Irish patients?

Meanwhile, we do know a few things about Tilray / Privateer and its biggest investor (and largest shareholder) Peter Thiel.

Before we go further, Peter Thiel has never really built anything, or designed anything, or even grown anything; besides money.  He is but a source of capital, undoubtedly one the most successful ones with an eye and a nose for start-ups that is rarely seen.

So you may not think anything of his funding of Hulk Hogan’s case against Gawker, it might have been clouded in secrecy but it catapulted this Ann Rand discipline onto the front pages along with its bankrupting Gawker.

For someone with a strong urge to protect and defend privacy rights, by litigious means if necessary (now who does that remind you of), he makes his donations to Donald Trump very public as well as his politics.

This post is really not about one of Tilray’s largest shareholders Peter Thiel, or his private life since there are servers of web pages, blogs and books dedicated to him; he’s even in today’s papers over comments suggesting that the FBI and CIA need to investigate Google for treason.   And supported with a Presidential seal;

Nor is he being introduced through his various investment funds and vehicles to suggest connecting dots with other funds close to the decision.

Peter Thiel being introduced here to further the point that Minister Harris and the HPRA need to approve other companies, and not just to have healthy competition but to provide patients and their care teams wider options.

Many people will find Thiel’s activities troubling, for example, one of his investments (Palantir) has significant contracts with ICE which has spurred on Facebook employees to have him resign from the board

If it is enough for employees of the company he was the first in with his $$$$$$$, then why shouldn’t anyone else, least of all the Country that hosts so much beneficial support for Facebook.

Tilray, in fairness, is a good company, and has funded research into Dravets syndrome.   Which you will be familiar with through the heroic efforts of Vera Twomey.

But when Tilray introduced this medicine in Canada it was ’sold at an introductory discount prices as well as in compassionate pricing program based on financial need’.

I am not going to incite any notion that the Minister or the HPRA didn’t negotiate any introductory pricing, besides, we can do a price comparison when the prescriptions start to get filled and judge for ourselves.

So, who will it get this onto those pharmacy shelves? Say hello to Novartis AG.

You will know them already as they have significant presence in Simon Coveney’s home ground in Cork.

But here’s how they will look like, and in the words of Tilray CEO and Privateer Founder Brendan Kennedy;

“If a product comes into a pharmacy with the Sandoz logo co-branded on it, or if a pharmaceutical sales rep is talking to a physician about a product that’s branded as Tilray and Sandoz, it lends credibility to that product.”

You would think that this big fat Greek scandal / may have caused the Irish Government to pause and consider the optics of awarding the first medicinal cannabis import license to a company controlled by Peter Thiel via a JV with this scandal ridden pharma company?  (Or even a journalist.)

Not a bit of it. It’s all right up their street with Big Pharma and Jobs for the Boys.

He of the “U.S. President Donald Trump’s former personal attorney Michael Cohen testified on Wednesday that Swiss drugmaker Novartis AG initially wanted him to lobby for the company when it retained him with a $1.2 million contract, but that Cohen refused.”

But what about the rest of us? Meaning you, well nothing actually.

Tilary has done a Websummit and chosen Portugal for its EU operations.  Ireland is good enough for Facebook and Paypal and all those Tilray big Pharma partners but not for Tilray’s EU HQ; anyone know why?

Far be it from us to know any better since Mr Kennedy is paid the big bucks to make those decisions, $250m last year as it happens. Beaten into second place for the year by Elon Musk; maybe next year Brendan.

No wonder Fine Gael Ministers are like teenage boys backstage at an Arianna Grande concert.

So, the good news is that medical cannabis should be in pharmacy drawers by the time Slade is back on in shops and elevators, but the bad news – your very typical Nothing to see here is being pulled over your eyes.

Ireland needs more to pick from than just Tilray.

Ireland needs to allow patients grow their own rather than service Big Pharma’s reps ‘commissions.

Ireland needs to roll out its own commercial producers.