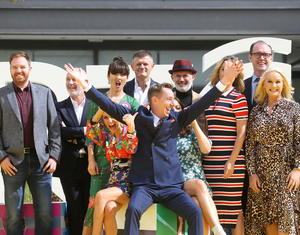 It’s been an interesting week from the perspective of the average person. Our betters in Dublin have decreed that everyone must pay for RTÉ and its associated services even if they never use any of them.

And we have a government minister apparently delighted that those with drug problems won’t be treated in her constituency.

I say apparently because Josepha Madigan denied approving the wording of the celebratory letter in question even though it contained her signature.

As for RTÉ, it was mooted last week that a broadcast charge is to be introduced to replace the seemingly outdated television licence.

The current licence, it is claimed, is not sufficient because people are “evading” payment. More precisely, 12% of the population don’t pay any licence. Included in this figure are those with an exemption due to the fact that they don’t own a television.

My family and I are included in this.

But a broadcast charge is set to fix that. Now any household with access to a computer, smart phone, or tablet, will be forced to pay.

Not long after it was announced, Dee Forbes, the director-general of RTÉ, proposed that the new charge be added to people’s utility bills so that payment cannot be avoided.

This, she argued, “has happened in other markets” with “very positive” results. Considering the reactions to her proposal among the wider public, don’t be surprised to see a campaign similar to the anti-water charge movement spring up.

Her comments are completely out of touch with the concerns of the wider public and those who rightly criticise RTÉ. It has a long history of a tepid, and lack of, original programming. And that’s not even mentioning the massively inflated salaries of its various presenters.

Add to that its blatant bias towards anything slightly to the political left. Miriam O’Callaghan’s questioning of Mary Lou McDonald in May was a masterclass in this political bias. In the space of 15 minutes O’Callaghan interrupted McDonald 31 times.

This was not an aberration. We routinely witness and accept this kind of behaviour from our national broadcaster.

As a result, one would think RTÉ is in no position to be forcing a charge on people who, when given the chance, would prefer to spend their money elsewhere. What it comes down to is that right now RTÉ has a serious public relations problem.

And this is a pity. That’s because a public broadcaster is an asset. It can offer services to the wider public as well as minorities who otherwise would go unrepresented in the privately owned media. It would be classed as a public utility due to the importance and scale of the services it would provide.

Given this, it wouldn’t need to run at a profit. Public utilities are inherently positive given that they are owned by the public and provide for their needs. Therefore, seeking to achieve a profit becomes secondary if it even enters to equation whatsoever.

But RTÉ is not run like a public utility in this sense, as much as its defenders and representatives might claim. Instead, it’s run along the same lines as a private company with an overriding need to create profit.

But it has one advantage that others don’t: The licence fee. It is in effect a bailout for RTÉ which, if run along free-market principles, would have crashed and burned long ago if not for the licence fee.

This is what irritates more than a few people. It puts the profit motive above all else, thereby ignoring sections of the population who would be unprofitable to provide for.

Its programming is telling in this regard as well as its lack of indigenous productions. Yet, it is funded by the taxpayer via a not insubstantial sum of money in the form of the television licence.

According to the Irish Examiner, RTÉ “received €189.1m from the television licence fee last year and made €150m from commercial revenue”.

There is of course more to RTÉ than television and radio. But the question still remains if the current incarnation of RTÉ is worth the price.

Many, myself included, are willing to pay for media in various formats. The Broadcasting Authority of Ireland (BAI) recently revealed that young people are in fact more likely to pay for access to media than older generations. It wrote that although the rate of those willing to pay for news stands “flat” at 12%,

When asked if they could only have one subscription for a year, “video streaming services (e.g. Netflix, Amazon Prime) were the most popular (35%)”. If those under 25 are of the same opinion, then RTÉ is in serious trouble in the coming years.

This might explain the ridiculous proposal of Forbes. Perhaps it speaks to a desperation in Montrose as opposed to aloofness.

Either way, the likelihood that any attempt to tax people for RTÉ via their utility bills will go unquestioned is highly unlikely.

How Forbes and company react in the coming days will play a large part in setting the atmosphere for any anti-broadcasting charge protest movement that emerges. We’ve seen what the arrogance and scaremongering of the government did when it came to the anti-water charge protests. More of the same might await RTÉ.

Hopefully the executives at RTÉ will take some time to reflect on public sentiment that emerged over the weekend.

Taking time to consider why people are so irritated at the possibility of the broadcasting charge, as well as a general contempt for the television licence as it currently stands, would do them well.

They might also want to consider how to attract the youth audience who are willing to pay for their media.

The simple truth is that it’s 2019 and people can be — and are — a lot more discerning when it comes to where and how they access their news and entertainment. If that means paying for it they’re willing to do so. There’s an entire demographic there ripe for RTÉ to provide for it. If only it knew how to be reasonable and realistic.

28 thoughts on “Bryan Wall: You’ll Pay And You’ll Like It Too”