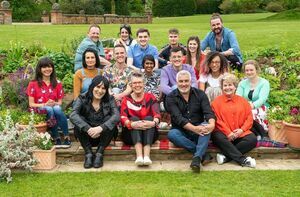 From top: hosts and contestants on The Great British Bake-Off 2019; Vanessa Foran

Channel Four kept it all very quiet, there was no word at all until they announced the cast (as you were btw) and the Season Premier a fortnight ago.

There was barely a mention until the competing bakers were announced this day last week.

Even I needed reminding that the tent was back up, and the news came from a lad who’d have an anxiety attack if he had to separate eggs.

Before we flour our worktops and roll out this year’s Bake-Sheet series, I need to make what I think is an important disclosure; towards the latter end of last year’s (Season 9) I got stumped in a swamp of lethargy and fatigue.

Out of the nine series so far, I have only missed one show, last year’s final, and between one thing and another I couldn’t even summon the curiosity to see what the bakes were or follow the recipes. I still haven’t. So, I will be somewhat lacking in background to bakes and winners.

I just lost my appetite I suppose. I couldn’t even gather the excitement for Celebrity Bake Off, and it was the best run yet; Russell Brand ffs  (on a side note Harry Hill a Star Baker himself, is signed up for Junior Bake Off 2019).

Hopefully this gap doesn’t interfere or hinder Bake-Sheet 2019; after all it always and only ever is about the bake in front of us. And the Hollywood handshake.

On that I don’t care what conspiracies are rising out there, or his threats to cease delivering the award. There is no bigger currency in baking than a Paul Hollywood handshake. It will never lose its lustre or its true value.

So now to tonight, and a few eye-openers.

Then there’s the very noticeable age profile of this year’s Bakers. Again, that might just be me; you will meet only one baker tonight older than me.

Admittedly Bake Offenders like myself are always left dazed at what young smarty pants hipster bakers produce, and the flavours and ingredients they introduce, last year’s Kim-Joy being one of the most exciting and unique bakers that ever set foot inside the Tent, so I’m, for now anyway, suggesting that maybe the majority of applications are coming from the under-35s.

Then there’s the reality check; maybe I am that the oul’ wan with the durty laugh, and the old school wooden spoon baking tips?

Fair enough, but I will also have to admit that it would break my heart to see Channel Four exploit their Love Island success, because it would ruin all the previous nine series and what Bake Off grew into from that touring floppy tent in Season 1.

Even with the genius holding up the decision, it still took enormous courage to cast Sandi Toksvig and Noel Fielding into a mainstream household format.

They took a huge risk by replacing Mary Berry and introducing ad-breaks and sponsors. So, for that reason I trust the producers won’t leave Season 10 down.

A few more things to watch out for; two from Essex. So be prepared for a load of yu’au’ roi darlin.

And there is a Man Bun that might force you to look away.

They took my advice and returned to Cake; but with a twist. Fruit Cake is your episode 1 tonight.

For planning purposes, tonight’s show is 90 mins – maybe two will go and bring us back to normal. Or maybe they are giving us more time with each baker, which was always an issue in the early season.

That would make sense because the contestants were confirmed as far back as February, so maybe, just maybe they couldn’t separate two of them?

Anyway, I am going to leave us all completely open-minded and not cause suggestion that might influence.

So just to remind you all again that I will not be following any GBBO Social Media or Tabloid coverage, and will try to take each bake one by one as independently and as uninfluenced as I can.

In the meantime, grease your baking tins with this

And one spoiler alert. Bread Week is rumoured to be EPIC.

Vanessa will be reviewing each episode.