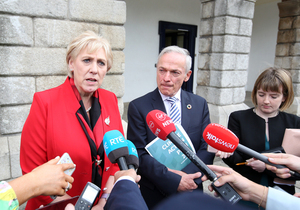 Irish Ministers @HHumphreysFG and @RichardbrutonTD distance themselves from comments made by Michael D’Arcy who compared Boris Johnson to Oliver Cromwell. pic.twitter.com/1yseo5q6nu

Further to yesterday’s tweet by Minister of State Michael D’Arcy that Boris Johnson’s decision to seek a suspension of the House of Commons was the “most anti-democratic” decision by a prime minister since Oliver Cromwell established a “protectorate government” in the 1600s.

Ireland’s business minister Heather Humphreys said: “First of all, minister D’Arcy has removed that tweet. As far as we are concerned, we are not going to comment on internal British politics.”

The Irish communications Richard Bruton, another member of the Fine Gael party, said: “We are not going to get involved in British politics because they have a lot of decisions to make.”

Red For Wrong, Blue For Right