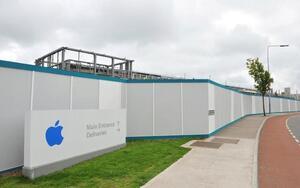 Even among those employees who were concerned by the ethics of the programme, there has been anger about how the job losses have proceeded.

“I’m relieved this information came out,” said one former contractor who asked to remain anonymous due to a still-active non-disclosure agreement, “although I was involved in the work and I just lost my job. Discussions around ethics in this job was a constant between workers, but we don’t know how to bring it up.”

But, they added, “Apple, recruiting through vendor companies in Ireland, take absolutely no responsibility in the employment of contractors and their treatment in work.

They do what they want, and when they’re done with your project or they screw up (like what just happened), they tell your vendor company to let you go, which they do … It’s been coming at them for over a year.

How could they not see this coming? Did they think about protecting their employees at all? Or just their reputation?”

“We’ve all been laid off after the scandal, with no protection against this. More than 300 at once just in Cork, with no redundancy, just one week’s notice.”

“It is not acceptable that workers can be made unemployed with no notice given and then paid off with just one weeks’ pay. Apple are responsible for the position these workers find themselves in and Apple cannot just turn their backs and ignore the workers’ plight.”

Evolution Of The Scroll Bar