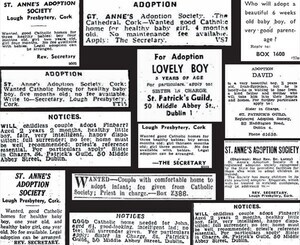 Today is International Day of the Disappeared.

The Irish Council for Civil Liberties (ICCL) has reiterated its call for the Government to ratify the UN Convention on Enforced Disappearances (CED).

‘It is essential that government appropriately address the potential enforced disappearance of hundreds, if not thousands, of children from mother and baby homes and the ongoing legacy of harm caused by this.

The Mother and Baby Homes Commission has said they believe information was withheld from them, and indeed that Church bodies provided information which was “speculative, inaccurate and misleading”.

CED would require investigators to have the necessary powers and resources to conduct the investigation effectively.

Through its continuing failure to compel witnesses to give evidence to processes of investigation, the State is helping to hide the truth and ensuring families of the disappeared remain in the dark.

If it ratified CED, the State would also be obliged to hold the perpetrators of these human rights violations criminally accountable. ICCL is concerned that the government’s current strategy of investigation is hindering future access to evidence, and thereby preventing prosecutions, by prioritising secrecy over transparency.

We are particularly concerned that the Retention of Records Bill, which is currently passing through the Oireachtas, will seal all evidence given to the Mother and Baby Homes Commission for 75 years.

This is particularly worrying given that An Garda Síochána could not carry out prosecutions stemming from the Ryan report because of the Commission’s similar terms of reference.

In 2016, when the UN Committee Against Torture demanded to know why there had been no prosecutions, the State reported that the perpetrators identified in that report could not be named.

This approach to potential evidence of criminal wrongdoing is inexcusable, particularly given all that has come to light over the past year, including the falsification of adoption certificates, the possibility that the state was complicit in what could be considered child trafficking, and the ongoing struggle of adoptees to access their basic information, including birth certificates.

ICCL has repeatedly called for information to be provided to those who were illegally or forcibly adopted in Ireland during the twentieth century but the State has yet to respond appropriately.

Despite numerous apologies and gestures towards restorative justice for survivors of the cruel and inhumane system of institutionalisation of the most vulnerable in this country, the State is still not living up to its obligations to survivors or families of victims.

It must act to properly address the ongoing legacy and harm caused by the range of human rights violations that occurred in these institutions.’

Is The ‘Public Service Card’ Legal?

4 thoughts on “Lost In Traffick”