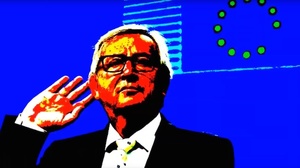 “Who caused the crash, baby?”

That’s the chorus of the debut single by Ore aka Emmett O’Reilly.

It’s a deceptively jaunty pop confection but scratch the surface and there’s a deadly serious political blue pill underneath its Wonkalicious sugar coating.

The answer to the question is hinted at in the video, which was edited by Emmett.

The Dublin-based musician – who worked for Hot Press magazine – was once the singer of a New Romantic group in the 1980s called Montage and is currently assembling a tribute band to David Bowie called Earthlings. Watch this space (oddity).

Nick says: The men who sold the world better watch out.