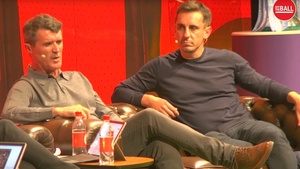 A guy who walked out on a World Cup because the training pitch was dry telling a man who struggled with his brothers death to get over it https://t.co/asvBkec6uL

He ridicules a man because he cries in public about the death of his brother?
Toxic masculinity at it’s finest.
I admired Keane’s take-no-shit approach to Saipan, but strong men don’t have to bully others when they’re down. Not happy with @offtheball giving this bile a platform

He’s crying on the TV about his family situation’ – Roy Keane hits out at Walters, Arter and Ward (Independent.ie)

Roger Over. What’s Our Vector Victor?

Anything Good On Today FM?

A Roy’s Own Story