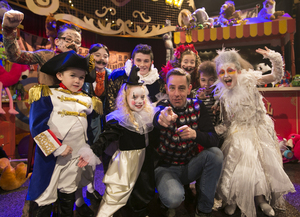 We’re going to save this station.

One product placement at a time.

Considering the audience numbers generated by the LLS toy show the ad rates are no big surprise but the cost of the ‘one for everybody in the audience’ is.

Ever wondered what it costs to give away an audience prize on the show? Well, for a flat media fee of €10,000 – and subject to approval from the broadcaster and the show’s production team- clients will be expected to give away 230 prizes with a minimum value of €150 each.

So doing some quick maths tells me that even if you go with a prize that’s worth the bare minimum a giveaway will cost a company €44.5k.

Earlier: ‘Not So Exceptional’

A Sucker Born Every Minute

9 thoughts on “The Cost Of One For Everyone”