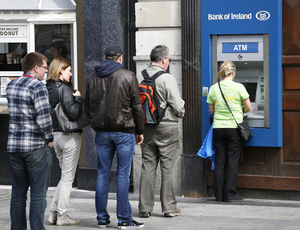 The slowdown is beginning. Whether it is a slowdown, as the Minister for Finance claims, to a more sustainable level remains to be seen (growth rates of five, six, seven percent are not sustainable). It could easily be a prelude to something much worse with a no-deal Brexit looming.

Let’s look at some of the relevant indicators.

Domestic demand comprises all economic activity excluding exports and imports; that is, consumer spending, investment and government spending on public services. Like so many other economic things, there is no one measurement. 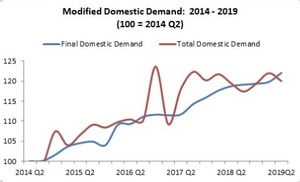 The two measurements give slightly different perspectives. With final demand, it can be argued that growth continues. However, total demand suggests that it has flat-lined over the last two years.

The difference between the two measurements can inform alternative narratives. The Minister for Finance pointed to final demand to suggest things are still going fine. He couldn’t have said that if he referred to total demand.

We don’t have to choose one measurement. We can content ourselves with showing that there is some evidence of a slowdown given total domestic demand’s flat-line.

Purchasing managers’ Index, or PMI, is an index of the prevailing direction of economic trends in the manufacturing and service sectors. It surveys a range of enterprise activities: new orders, inventory levels, production, supplier deliveries, and employment.

While this is not an official survey, it is useful insofar as it tracks business activity in close to real time. The surveys seek to assess whether business activity is improving, deteriorating or stagnating. The following are from AIB’s PMI surveys.

When the PMI index goes below 50 (which it has done over the last three months), it suggests that manufacturing activity is contracting.

While the Services PMI is not contracting (i.e. hasn’t fallen below 50) it has declined from a high in 2016. This could be falling to a sustainable level. However, if it follows the pattern of manufacturing the next few months could see further deterioration.

Given the demise of GDP as a reliable measurement, many commentators have looked to employment data as a proxy for economic health. On that basis the economy has been in rude health. However, the latest employment numbers may suggest a turning point. 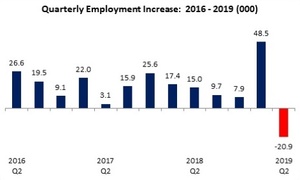 Suddenly, in the second quarter of this year employment fell by 21,000. However, this was off the back of a rise of nearly 50,000 in the first quarter. This looks like one of those glitches (that’s the technical term) one can get in quarterly series.

Looking Under the Hood

In 2006 the economy was looking strong. By 2008 we were in a recession. A year later we were in a crash. Economic strength was an illusion.

So what about this time? A no-deal Brexit could expose faultlines that are now barely seen. And without properly reading the economy, we may launch ourselves into policies that not only fail to address the problems but actually make them worse.

In 2008 we started on a downward spiral originating in the construction sector. Instead of addressing the source of the problem in that sector, we fanned the flames through austerity policies.

As IBEC’s Gerard Brady pointed out, the counties that are most exposed to a Brexit downturn are also lower-income areas (e.g. Cavan, Monaghan, Donegal, etc.). This suggests that a downturn would have an uneven impact throughout the country, but would be particularly severe in some.

NERI’s report on the growth of precarious work suggests that employment, while growing strongly, may be vulnerable to a downturn. To what extent are even supposedly robust measurements still tainted by the activities of multi-national companies?

The IMF’s suggestion that 60 percent of foreign direct investment into Ireland is ‘phantom’ could lead to distortions that undermine our ability to read the economy. And soft indicators like ‘inability to afford an unexpected expense’ and ‘difficulty in making ends meet’ suggest that household finances are in a weaker state than before the crash.

We may be entering a downturn with a weaker economy than headline numbers suggest. All the more reason why economic commentary must become more forensic and more sceptical, analysing the detail of activity rather than trusting headline numbers featured in official press releases.