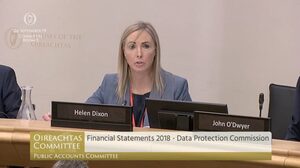 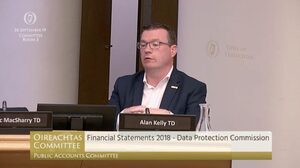 The Data Protection Commissioner Helen Dixon is fielding many questions about the Public Services Card at a meeting of the Public Accounts Committee.

But separate to the Public Services Card, and in response to a question from Labour TD Alan Kelly, Ms Dixon told the committee that, in terms of the supervision and enforcement of data protection law, Irish taxpayers will incur costs for having multi-nationals headquartered in Ireland.

“Once the Irish DPC [Data Protection Commissioner] starts administering fines and sanctions on companies, there has been a debate about whether all of that goes to the Irish Exchequer and whether that isn’t shared across the EU member states.

“At the moment, it’s our understanding that it goes to the Irish Exchequer.

“So, already, there’s an opposite debate to the question you’re opening up which is that: well is that fair? If Ireland supervises most of these big tech companies and there are infringements and fines, does Ireland get to keep the fines? So that’s an open question that’s ben raised a number of times.

“In relation to the costs, I think it’s well possible that the Irish taxpayer will end up, by virtue of these companies being headquartered here, incurring costs.

“The Irish taxpayer has incurred costs already in relation to the case that you referenced that’s before the Court of Justice at the European Union on transfers of data because it arose from a complaint by Max Schrems against Facebook Ireland.

“Facebook Ireland being located here means that we are responsible.

“However, under this Co-operation and Consistency Mechanism that operates around the one-stop shop in the EU now, if there’s a dispute in relation to the findings that I make – so I’ve to circulate a draft decision in relation to any of these cases that concern multi-nationals to my fellow EU Data Protection authorities.

“And if ultimately they have a different view, that I can’t reconcile into my findings, I institute a dispute resolution mechanism before the European Data Protection Board and it may take over the decision making. And if a company affected by that decision disagrees with it, it takes an annulment action to the Court of Justice of the European Union.

“So, there will be a certain number of cases that may end up being taken out of Ireland’s hands because of disagreement between data protection authorities and the European Data Protection Board will then have to bear the cost for defending those cases before the CJU.

“But, undoubtedly, the effect of having the multi-nationals headquartered in Ireland is going to give rise to costs for Ireland in terms of the supervision and enforcement of data protection law.”