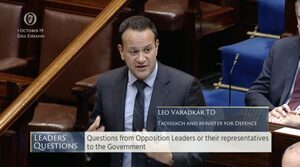 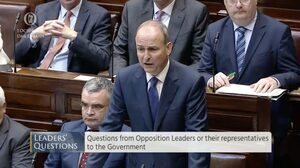 Mr Martin asked Mr Varadkar if he discussed these “non-papers” with Mr Johnson during their recent meetings and asked if he could outline their “provenance”.

He also asked Mr Varadkar if he was aware of them before last night’s report.

Mr Varadkar said he hasn’t seen the “non-papers” but he was aware of their existence.

Mr Varadkar continued to say he welcomed Mr Johnson’s comments this morning “when he disowned and distanced himself from those non-papers”.

He said had Mr Johnson not done so, it would have been “hard evidence of bad faith” on the part of the British government.

He said, in December 2017, the UK government promised Ireland and the EU that there would be no hard border and no physical infrastructure or associated controls or checks, as a consequence of the UK leaving the EU.

“We expect the British government to honour that commitment made in good faith in the withdrawal agreement.”

“When the Government, when we talk about checks, we talk checks being necessary in the context of no deal. And if we face no deal on the 31st of October, if the UK decides, and it will be their decision, to leave the European Union without a deal and operate on WTO rules, then there will need to be checks – at the ports, at the airports, perhaps at business level and perhaps near the border too.

“That is just the reality of the situation. But  that is in the context of no deal. We’ve never been in the position of signing up to checks as part of a deal.”

“I think, Taoiseach, you need to be careful in terms of welcoming everything that Boris Johnson said this morning because of course Boris Johnson made it clear that, he says ‘we’re going to make a very good offer, bla, bla’ and so on.

“….But if you’re trying to keep, there is a difficulty, he said, if you try to keep Northern Ireland in the Customs Union because one of the basic things of being in a country is you have a single customs perimeter and a single customs union so, in essence why he’s sort of dismissing the non-papers, the essential message of what he’s saying today is: he wants to keep Northern Ireland out of the Customs Union.

“But I think it seems to me, very clear, that he’s sticking to the idea that he does not want, as part of the exit deal, any provision which would ensure and guarantee that Northern Ireland would remain within the European Union customs union.

“Would you accept that that seems to be his position right now? Or do you have other evidence to suggest that he may be willing to compromise on that?”

“It is his view that the United Kingdom should leave the European Union, whole and entire, to use his language, and that means the UK, including Northern Ireland, leaving the Customs Union.

“But as I explained to him when we met in New York, there is a reason we came up with the deal that we did, after two years of negotiations with Prime Minster May and her government. And what the backstop provides for is a single customs territory.

“It doesn’t provide for Britain or Northern Ireland to stay in the Customs Union. It provides for what’s described as a single customs territory  and that satisfied our demand and our desire that there not be customs checks, north and south.

“But also it satisfied the concerns and desires of many unionists that there not be customs checks east, west. A single customs territory designed specifically to meet that need. And that’s why we ended up with the backstop. And that’s why the backstop is actually the best solution.

Sorry, who does Leo think he’s kidding. Boris Johnson has publicly, on several occasions, disowned the 7 December 2017 declaration. He fuppin’ well put it in writing to Donald Tusk in a letter on 19 August 2019:

“Accordingly, as I said in parliament on July 25, we cannot continue to endorse the specific commitment, in paragraph 49 of the December 2017 joint report, to “full alignment” with wide areas of the single market and the customs union. That cannot be the basis for the future relationship and it is not a basis for the sound governance of Northern Ireland.”