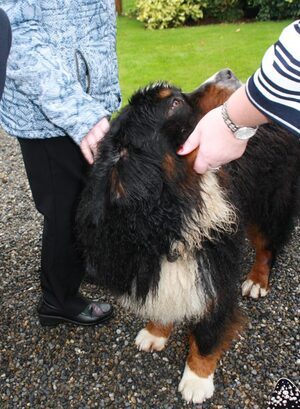 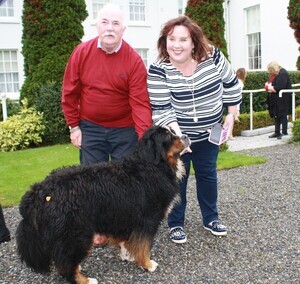 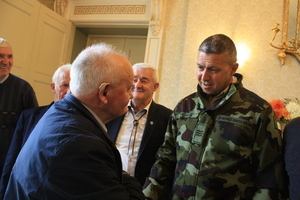 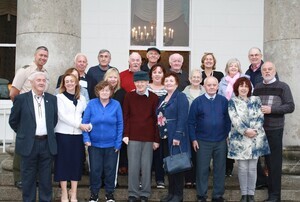 While our President was away (in America); his able staff were hosting a reception for members of the Tuam Mother and Baby Home Alliance.

Sergeant John Grennan together with the Aras pets; Brod and Sioda made us feel most welcome.

We enjoyed afternoon tea upon arrival while Sgt Grennan provided background and history of the house. We were then treated to a guided tour and spent some time in the newly refurbished Visitor Centre which holds historical data, gifts, artefacts, etc.

In attendance were two survivors; former Irish Army members, Michael O’Flaherty and PJ Doran both of whom had served overseas.

Survivor Joe (pic 3) who did not enjoy the same opportunity had a word with Sgt Grennan From the image you’ll see Joe engaging in his usual banter – ‘wouldn’t I look good in that jacket’ ….

Brod and Sioda joined in the fun; wagged their tails in approval and barked their appreciation as we walked the grounds.They were treated to some cuddles and attention.

They are BIG! And as it had been wet just before they seemed to have enjoyed the drizzle which sparkled on their coats….