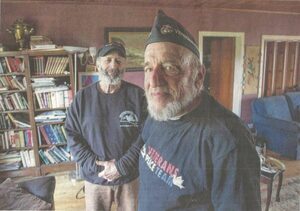 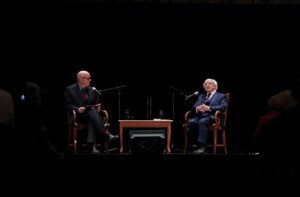 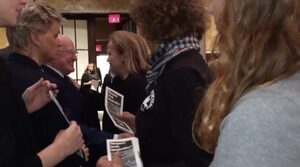 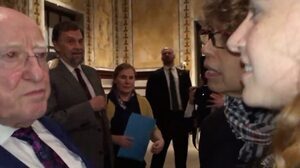 Two US army veterans and members of Veterans For Peace, Ken Mayers and Tarak Kauff, aged 82 and 77, were arrested on St Patrick’s Day at Shannon Airport.

It followed them protesting against the continued use of the airport by the US military.

They’re accused of causing €2,500 worth of criminal damage to the airport’s perimeter fence, as well as unlawfully trespassing into a taxiway.

They’re now awaiting trial and, on Monday, appeared before Ennis District Court, with the court hearing that they’ve sought a transfer of the case from Clare to Dublin.

Their case will be up for mention again on October 29 – when a date for a hearing of the transfer application will be set.

Last week they took part in a ‘Boots On The Ground For Freedom’ walk – in protest against the use of Shannon Airport by the US military.

President Michael D Higgins was doing an interview with WYNC, during which Ellen Davidson, wife of Tarek Kauff, rang into the show.

Ms Davidson, who lives in Manhattan but is currently based in Dublin, said:

“I understand President Higgins is a big supporter of Irish neutrality so I’m wondering why the Irish Government is allowing US military flights to go through Shannon Airport in violation of that neutrality, bringing troops to the Middle East, to the wars that cause the refugees he’s been talking about.

“And, also, about the case of two US veterans who did a peaceful protest against those flights in March and they’ve been held in Ireland ever since, without their passports, on very minor charges, for a peaceful protest.”

“Yes, I think that your caller will know these are issues, when I was a member of parliament, I spoke and acted very often. I do think that the issue – the two people whose case I am familiar – is a matter for Government and I will draw the attention of Government to it.

“But you’ll appreciate that as president, I cannot interfere in the  executive decisions of Government.”

At the New York. Library.

President Higgins took part in an interview with journalist and senior writer at the New York Times Dan Barry.

After the interview finished, Zaidie Mayers, the granddaughter of Mr Mayers, approached President Higgins and raised her granddad’s case.

“I’ve read about the two people who were on that walk. I’ll see what I can do.”

Previously: Story Of Why