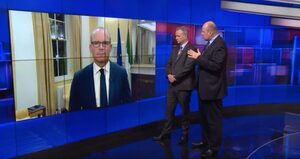 On Virgin Media One’s The Tonight Show with Matt Cooper and Ivan Yates:

“We certainly haven’t seen any proposals yet. I read on various social media channels that Prime Minister Johnson is going to bring forward proposals tomorrow. Some are even saying that he’s been briefing certain EU capitals in relation to these ideas since Tuesday, we haven’t seen anything. If the reports we are reading are true it doesn’t look like the basis of an agreement, that’s for sure”.

“The rumour mill this evening is suggesting that there would be a four year time limit, and then a choice to be made by Northern Ireland at the end of that period. But again that’s all speculation, but I mean our position has been very clear on a time limited backstop, if it’s time limited and you can’t answer the question what happens at the end of that time period, then it’s not a backstop at all.

Thanks Nadine Maloney and Richard Waters

3 thoughts on ““We Certainly Haven’t Seen Any Proposals Yet””