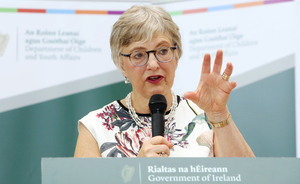 During questioning from forum [Mother and Baby Home Collaborative Forum] members, the delegation was shown an almost entirely redacted death cert the agency sent to a 69-year-old woman.

The woman was among the 126 cases of illegal birth registrations Tusla discovered in the records of the St Patrick’s Guild adoption agency. Its records transferred to Tusla in 2016.

The certificate was for the woman’s mother, but all information apart from a doctor’s signature and cause of death was redacted by Tusla, including details of the registrar general.

As the recipient of the record had never been legally adopted, the delegation was asked what legislative basis Tusla had “to start interfering with public records”.

“I think the reason to redact all of that is to ensure that it can’t be found in the GRO [General Registration Office] because it is third-party information as per GDPR,” the Tusla representative said.

The Irish Examiner has obtained an audio recording of that meeting [between the forum and representatives of Tusla] in which a member of the delegation said the agency carries out a “risk assessment” as to the “likelihood of someone being harmed or not harmed” before it decides whether or not to release personal information to adopted people about their early lives.

….The Department of Children and Youth Affairs (DCYA) has said there are around 150,000 adoption records in existence and approximately 100,000 of these are currently in the custody of Tusla or the Adoption Authority of Ireland (AAI). Tusla has held many of the records since 2014.

Previously: “Who Are They Trying To Protect Here?”

Tusla is going to have to be cracked open by the DPC or the courts. https://t.co/u6RhhSxM69

Really important point here – evidence of *illegal* adoption is being redacted from public records. What’s the constitutional justification for that?! https://t.co/U6zmgs1Uvb

‘Her Department Knew About Infant Mortality, Concerns About Illegal Adoptions And Trafficking In 2012’

4 thoughts on “‘To Ensure That It Can’t Be Found’”