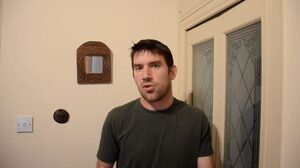 I’d been trying to ignore you, like some elderly relation
Who always seems to wait until a formal situation
To illustrate their ill-considered, prejudicial views
About the geo-political landscape or whomsoever they may choose.

But unlike that drunken uncle, who’ll grow sober and repent
It appears as though you’ve founded your entire government
On the premise of your own innate colonial ambitions
Where the rhetoric of fear, and hate, and all the old traditions
Have been dragged out of the grave and surreptitiously revived
By a xenophobic wave of politicians who’ve contrived
To redefine democracy, and turn it on its head
To hide the true plutocracy that governs in its stead.

But I grew up by the border, and I have family North and South
So it’s hard to just ignore the kind of bigotry you spout
When you can understand ‘The Troubles’ for the Civil War it was
And not some act of ‘folly’ or ‘The tail wagging the dog.’

And yeah, it’s true I am a Murphy, but my Grandad was a Sproule
And his father died in World War One when he was 12 years old
Who stood beside his fellow men to serve King George the 5th
At a time when men could still pretend and propagate the myth
That war was ever more than just a plaything for the rich
So while you talk about ‘Surrender’ now and ‘Dying in the ditch’
I just wish that you’d remember how that history was real
And not just propaganda for the prospect of a deal.

But I’m not so Euro-Centric to be utterly naïve
And I can understand the logic in why Britain voted leave
I mean – besides the flagrant lies and the mass manipulation
I can empathise with how the past would lead to a frustration
To see how once ‘Great’ Britain’s been belittled and reduced
To a bit part in the greater whole that Europe has produced.

‘Cause I’m not some classic advocate extolling the E.U.
I’m all too well aware to know that we’ve been shafted too –
We’ve had 42% of Europe’s banking debt
Inflicted on our people, though some would soon forget
The threat the ECB’s Jean Claude Trichet made
That a bomb would go off in Dublin if that fraud wasn’t repaid
Who brought a whole new meaning to the phrase of ‘Boom and Bust’
So I’m slow to see these bureaucrats as people we can trust.

But to be honest with you Boris, the older that I get
The more I realise that I can only trust my pet
And yeah, she took a while to settle, as a Setter cross Retriever
But when I look into her eyes at least I know I can believe her
Which is more that can be said about politicos today
In Dublin or in Brussels, or there in the UK.

‘Cause it feels like being caught between yourselves and the E.U.
Is a bit like being taught to play Beethoven on Kazoo
Where the music written down might look and act the same
But no matter how it’s played out it’s going to sound insane.

So fuck your jingoistic bullshit, and your normalising wrongs
And stick the backstop up your arse where your old empire belongs
And fuck your open racism, and fuck your prorogation
And fuck your Eton college and your Oxford education
And fuck taking away the whip from MPs who disagree
I commend them for their courage and display of bravery
To see you for the despot that you well and truly are
Fuck how you think, and what you say, and everything you are
‘Cause I never thought I’d say this, or live to see the day
But the more I see your face the more I miss poor Theresa May.

And sorry for the outburst, it’s just the aul’ Tourettes
It’s a curse of an affliction, but y’know how hard it gets
But sure look, I’ll let you go, and for now I’ll leave you be
And Remain your closest ally, and your friendly neighbour, me.