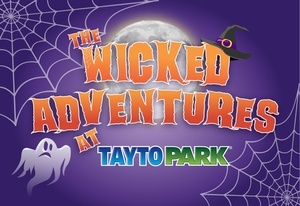 Who’s at the door?

Last week, with a FREE family pass to visit Tayto Park this Halloween to giveaway, we asked you to name YOUR most memorable (or least memorable) house-to-house Halloween collection moment.

Hands down it was mam telling all the trick or treaters to congregate at the back door. In the midst of no one answering the door my dad appeared on the roof over the back door in a crucifix pose wearing a facially deformed mask and a long black coat. Cue utter chaos!

The average age of the group was 6 years old! No one ever called to our house again for trick or treat….I suppose they saved money in the long run!

‘One Halloween manys a year ago in 80s Dublin my dad decided to dress as Evil Santy. He reckoned it would be hilarious to hide under the car and reach out and grab at kids coming up the driveway to the house.

He crawled under on his belly and squeezed himself in as best he could. Anyway, after about 10 minutes when the novelty wore off (the kids were wide to his antics and he had to take a slash due to consumption of many beverages) he tried to crawl out from underneath said car only to find his jolly red suit snagged! No amount of manoeuvering could get him out.

A neighbor rocked up with a jack but he was so well snagged he couldn’t move. Oh how we laughed.After about an hour of throwing peanuts at him and the entire neighborhood coming by for a good laugh we decided we might have to actually help him get out.

Eventually the Fire Brigade, who happened to be around the corner doing what they do on Halloween night, had to come over and free him.Best Halloween ever!’

Last year most of the children had been at the house between 7.30-8pm One turned up at a quarter to nine and he said: ‘I am your PERIOD. That is why i am LATE!’
I fell around the place laughing…

Last week: No Tricks, All Treat

No Tricks, All Treat

Halloween: It’s All About The Dogs

3 thoughts on “Apples Or Nuts?”