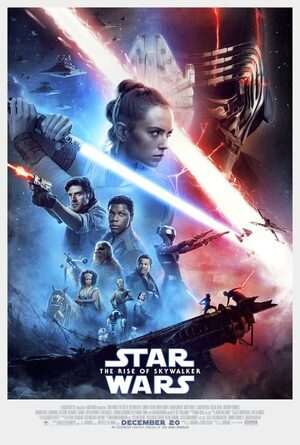 1. You ever get the feeling there are just too many trailers? There are so many things audiences are expected to get fired up about now that a lot of it just whistles by in the timeline before the next thing comes along. Next, next, next.

2. Well, never mind all that, because DisneyCorp has just “dropped” the final trailer for the final movie (as if) in the Star Wars saga, The Rise of Skywalker. They say final, as in the last in the trilogy of trilogies that George Lucas accidentally kicked off back in 1977, but Star Wars is very much here to stay.

4. For one, it’s only a few weeks until the long-awaited TV series The Mandalorian arrives. No word on when it’ll be available in this part of the world until DisneyCorp confirms its plans for the Disney+ streaming service, but the early word on John Favreau’s space western is very positive.

5. Back to The Rise of Skywalker; what can one say about the plot? Rey and Finn and company blast off across the galaxy on another adventure to apparently visit the wreckage of the Death Star and do something, stop something, start something, etc. Hot on their heels once again is Kylo Ren, who may or may not turn into a goodie by the end, if he and Rey can sort out their differences. He faked her out twice already though, so who knows.

5. Also in there in the most transparent attempt to keep tetchy “fans” on side is one Emperor Palpatine, played by Ian MacDiarmid, who was thrown down a shaft by Darth Vader in Return of the Jedi (1983) and by far the best thing about the wonderfully terrible prequel trilogy (1999 – 2005).

6. I say wonderfully terrible because despite their unquestionable awfulness, those movies have stubbornly refused be forgotten – exemplified by PrequelMemes, the spirited Reddit community that serves as an antidote to the “toxic fandom” that has grown around Star Wars since it was brought back to life in 2012.

7. On that note, I’m looking forward to the debate over which is the better trilogy once all this blows over. A strong case could be made for the prequels.

8. By the way, since they’re visiting the Death Star, does that mean Ewoks will make an appearance? Don’t bet against it.

9. Ahead of the December release date, why not take a trip back to 1976, to the very first Star Wars promo, before John Williams’ famous score was even written.

10. It will be the final screen appearance of Carrie Fisher, who would have been 63 yesterday.