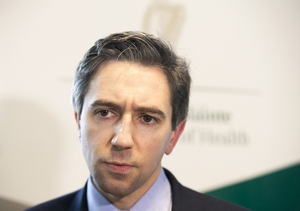 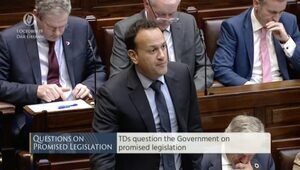 From top: Minister for Health Simon Harris and Taoiseach Leo Varadkar in the Dáil yesterday.

It follows reports in the Irish Independent this morning that Taoiseach Leo Varadkar voted for colleagues in the Dáil chamber, while the colleagues were in the chamber.

A spokesman for Mr Varadkar said he never voted for anyone who was absent from the chamber.

Audrey Carville: “Just finally, our political correspondent reporting this morning that the Taoiseach has confirmed he voted for colleagues who were in the Dáil chamber but who weren’t in their seats. Did you ever do that?”

Simon Harris: “You know I’ve been in the Dáil nearly nine years and voted thousands of times and I don’t recall a specific time I did it but I’m not ruling it out because the rules do allow it and I think what we’ve seen is, it has become quite commonplace. But there is a huge difference.

“There’s been a very, very successful job done to muddy the waters in recent days here. There’s a very big difference between doing that and breaching the constitution of Ireland.

“The constitution says you must be present in the Dáil chamber.

“There has been no evidence…and this, by the way, wasn’t started by Fine Gael. This was investigative journalism by the Irish Independent that showed Fianna Fáil TDs, in my view, breaching the constitution.

“And tomorrow we’ll have the Ceann Comhairle’s report. I’ve full confidence in his ability to get to the bottom of this. We need to tighten up this thing of, you know, voting and seats, I fully agree with that.

“But that shouldn’t be allowed to distract from people, you know, heading out the M8 down to Clare while somebody else stays in the Dáil and votes six times for them. We’re legislators, you turn up, you do your job and you vote.

“And if you can’t vote, if you’re busy or you’ve something on, you certainly don’t ask your buddy to press the button for you.”

Varadkar admits he has voted for colleagues who were in chamber (Cormac Quinn, Irish Independent) 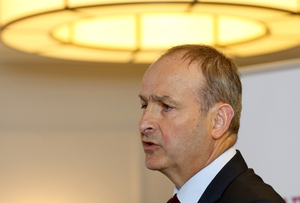 The instance where a vote was cast for Mr Martin in his absence happened during a Dáil debate on reducing the number of seats in the EU Parliament in February. Mr Martin is recorded as not being present for two of the three votes on the legislation. However, for the last and final vote the Fianna Fail leader’s vote is recorded as being present.

…for the third and final vote, Mr O’Brien is not recorded as voting in his own seat. Mr O’Brien last night admitted he may have incorrectly pressed Mr Martin’s voting button during at the end of the debate.

Vote cast for Fianna Fáil leader Micheál Martin when he was not in the Dáil chamber (Independent.ie)