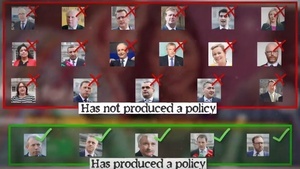 Being active on social media is not the same as being good at it. This is something Fine Gael learned yesterday morning.

At 9am it launched a digital attack claiming Fianna Fáil is not producing policies. Pretty basic stuff from a party in government, you’d have thought.

Hard to screw that up. Attack the main opposition party for not doing enough. Claim they are just criticising you, trying to score points and acting like an… well… an opposition.

To be fair, Fine Gael got most of the basics right. They produced a decent digital video, loaded with graphics and charts and pumped it out across social media platforms.

They backed it up with a press release in the name of Colm Brophy TD, hoping that the following day’s print media would pick up on it.

So far, so meh… yet, within barely an hour their digital campaign was not just misfiring, it was backfiring and going down in flames.

While the boffins in muppet… sorry, Fine Gael… labs got the presentation side right, they made an unholy mess of the content.

The message was not just wrong, it was badly wrong and now most of the Fianna Fáil parliamentary party was online telling everyone just how much they have been doing.

The pushback was fast and furious, but it did not come from Fianna Fáil Inc. via its official social media accounts.

It came organically, and within minutes, from individual Fianna Fáil TDs such as Jim O’Callaghan, James Lawless, James Browne, Fiona O’Loughlin posting lists of the legislation they had each produced.

They made the point that some of these initiatives, such as James Browne’s Mental Health Act, Jim O’Callaghan’s Parole Act and Michael McGrath’s Consumer Protection Act had been adopted by the Government and become law.

While others, like James Lawless’s four private members bills on Social Media transparency, Broadband, Research & Development and Drones), have been blocked by Fine Gael, despite their having support across other parties – an issue I have mentioned here before.

How dare Fine Gael accuse them of doing nothing. The first movers were soon joined online by most of their colleagues, each adding to the list of bills and reforms proposed, notably Darragh O’Brien TD who helpfully posted a list of 10 housing measures proposed by Fianna Fáil since 2017.

Within an hour or so, the Fine Gael attack had become a retreat. Even Colm Brophy, in whose name the statement appeared, was nowhere to be seen.

After two identical posts within a few minutes of each other; he scented blood in the water, realising that it may well be his, he promptly cleared off. The great Brophy attack had shown, to quote the great Paul Keating, all the ferocity and viciousness of being flogged with a warm lettuce.

This is perhaps unfair to Deputy Brophy, whose only real role in the debacle was to lend his name to this guff.

Perhaps the next time he is contacted by some Fine Gael press officer with another cunning stunt, he will do what any self-respecting government backbencher should do in such a situation and tell them to go ask some junior minister to do it, sure isn’t that what they’re there for? Failing that send them to Noel Rock.

I mention all of this because we are about to have – courtesy of the British general election – a five-week-long, big screen preview of the digital election campaign strategies, albeit on a smaller scale, we will likely see rolled out here next March, April or May.

Across the board UK parties are lining up significant online and digital campaigns. Back in 2015 British political parties spent £1.3m on the preferred platform for online political ads, Facebook, alone. That figure rose to £3.2m in the 2017 and is set to soar higher this year.

This does not include the other platforms or what the bigger parties spent in the pre-campaign period.

Well-produced content is reaching as many people as paid advertising and often has a bigger impact. Momentum, the Corbynite/Labour group raised £100,000 in less than 12 hours via free videos and posts shared by its supporters on Facebook and Twitter.

The last election here for which there are any figures is the 2019 European election. Though, according to ElectCheck 2019, a research report carried out by the Institute for Future Media and Journalism (FuJo) at DCU, the data from it is inconsistent making it impossible to come up with a comprehensive picture of the nature and scale of online political advertising here.

What a pity Fine Gael frustrated James Lawless’s Social Media (Transparency) Bill and stalled it back in Dec 2017. See how all this stuff comes full circle?

The little evidence there is comes from a review of the €60k spent on political ads on Facebook alone during the Europeans. To put this figure in context, it is still less than the failed Tory leadership candidate Dominic Raab spent in test ads for his bid for the top job.

Even from this anecdotal evidence you get a sense who is taking digital campaigning seriously and who is making it work. Broken down by party you find that Labour and Fine Gael each splashed out over two and a half times what Fianna Fáil spent on promoting its European Parliament candidates.

As I mentioned two weeks back, it is likely that Fine Gael will be studying the Conservatives digital playbook hard over the coming weeks and may have already planned a post-election debrief with their Tory counterparts as they did before the 2016 general election.

What Fianna Fáil will take from it is a bit more difficult to say, though if its MEP Facebook campaign spend (above) is anything to go by… it is not a lot.

While many of its spokespeople and candidates have developed solid social media and digital presences, many have not. The overall impact is less than the sum of its parts.

While yesterday’s Fine Gael limp firecracker was quickly doused by Fianna Fáil TDs piling in fast, the party will not have that facility in the throes of an election. Come the campaign TDs will be paying far more attention to the folks at the doorsteps than to posts on their smartphones.

It is then that Fianna Fáil will need its official voice across all platforms. While there were signs that the party was starting to find that voice and developing the capacity to get its message out beyond its existing audience, that work appears to have stalled, if not stopped.

Perhaps the powers that be within Fianna Fáil HQ feel that digital campaigning is not as relevant to them or their potential voters right now and that they can decide, closer to the election, to buy an off-the-shelf package or service that sorts out their presentational deficiencies while they focus on the content.

While yesterday’s fiasco – where FG got the presentation right and the content wrong – may confirm some in that view, I would still advise those to watch the UK election campaign carefully and learn just how critical digital campaigning can be in supporting traditional campaigning methods, not in replacing them.

I could be wrong. In its defence, Fianna Fáil’s softly, softly program is seeing them make incremental polling improvements, bringing it neck and neck with Fine Gael.

It is a better than even money bet that this is probably enough to see the party increase its number of seats, but is it enough to propel it ahead of Fine Gael?  We shall see.