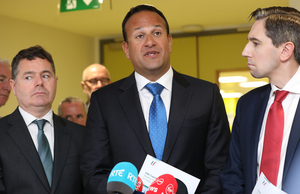 In the debate over healthcare we get a lot of commentary on how the health budget is out of control with continual overruns, combined with waiting lists and A&E overcrowding.

In this mix we sometimes get statistical comparisons which purport to show that we already spend more than almost any other European country on health.

It’s a statistical and comparative minefield trying to get a sense if we are spending too much or not enough, never mind if we are getting value for money.

One blog is not going to answer these questions definitively. But let’s see if we can ground the debate in some hard numbers by comparing our health spending with countries in our EU peer group, using relevant indicators. 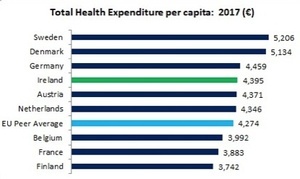 In 2017, Ireland total health expenditure was 2.8 percent above the average of our peer group, ranking 4th in the table. This would seem to suggest that we spend enough money on health care.

In Ireland, voluntary health insurance payments amounted to €634 per capita

The average in our EU peer group is €216 per capita

So the headline numbers can undermine clarity in the debate over government spending on healthcare.

When we focus on Government and compulsory health expenditure (e.g. state-mandated occupational or private insurance) we find Ireland falling below average.

When comparing Euro spending per capita, Ireland would have to increase health spending by 9.5 percent.

However, when we factor in prices, Irish spending falls even further, requiring an increase of 29 percent to reach our EU peer average.

However, we have to be cautious regarding PPS (i.e. purchasing power standards). The above uses Eurostat PPS. OECD has a different PPS measurement though both work off the same data.

Using Eurostat’s PPS, Ireland would have to increase Government healthcare spending by 29 percent to reach our EU Peer average

Using OECD’s PPS, the necessary increase would be 20 percent

While the OECD shows a smaller gap between Ireland and its EU peer average this seems seems to have widened in 2018 to 23 percent, though these are only provisional figures. 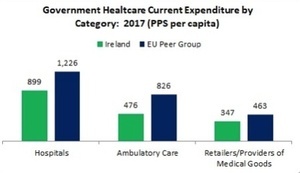 In hospital expenditure, Ireland lags far behind its EU peers. Irish spending on ambulatory care (which includes GPs and medical specialists for outpatients) is even further behind while spending on medical goods (pharmaceuticals and other goods) is closer to the EU peer average.

There are three important issues following on from all this.

First, the Eurostat data only takes us up to 2017. Between 2017 and 2020, real healthcare spending per capita rose by approximately 10 percent. This is likely to be higher than our EU peer group so the gap should have closed somewhat.

Second, demographics are a significant driver in healthcare spending. The older the population the more spending there will be. Ireland has a lower older demographic and, therefore, need to spend less on health. So, while Ireland is a health under-spender, is this merely a function of demographics. Could it be that Ireland, once age-related spending is factored in, is actually an average health spender or even higher?

It is difficult to test this given the paucity of data. The OECD does provide data from the Netherlands regarding spending on different age groups.

If we use this data and apply it to German and Irish age structures we might be able to get an insight as to whether Ireland spends too much or not enough – at least in comparison with Germany. I emphasise this is a stylised estimation and should be treated cautiously.

The gap in actual spending between German and Ireland is 16.8 percent. Demographic-based spending is 18.4 percent. This suggests that, after factoring in age, Ireland spends 1.4 percentage points more than Germany. However, when price levels (PPS) are factored in, Irish spending drops back down again as we saw above.

This is just an exercise and more data would be needed to confirm this. A similar exercise done with Dutch levels of spending shows the same outcome – near parity when age is factored in but a large gap re-emerging when prices are factored in.

Third, even though Ireland appears to be an under-spender, this shouldn’t lead us to think that merely increasing expenditure will solve all the problems in healthcare.

Whether it’s waiting times or A&E overcrowding, more resources would be welcome but we can’t be sure whether some of these issues are structural.

And then there is the upfront cost of Slaintecare – with additional costs arising from free provision of healthcare and the ending of private use of public assets.

However, what the above shows is that, when comparing like-with-like, Ireland does not appear to spend too much on healthcare and may well be a significant under-spender when factoring in both age and prices.

If this turns out to be the case then basing policy on the assumption that we spend too much will undermine sustainable and positive reform.

9 thoughts on “Michael Taft: Do We Spend Too Much On Health?”