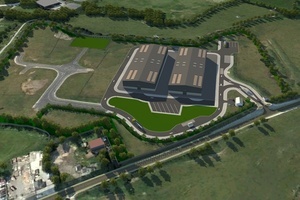 How the ‘monster sewage plant’ in Clonshaugh will look

Plans for a €500 million waste water treatment plant in north Dublin have been given the go ahead by An Bord Pleanála.

…The permission allows for a 12km outfall pipeline to bring the treated wastewater from there to Baldoyle and out to sea for discharge around 1km north east of Ireland’s Eye.

…Local residents, farmers, water sport clubs and environmentalists had opposed the plan fearing the effect on the local land and the sea.

In particular they questioned the effect on Dublin Bay’s UNESCO designation and in particular Ireland’s Eye which will be near the outfall.

€500m ‘monster sewage plant’ gets go ahead in Dublin (RTÉ)

Earlier: Sewer Would You Get It?