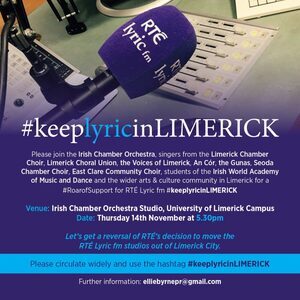 Yesterday, in the Seanad…

“My biggest concern is that the University of Limerick wrote to RTÉ two months ago, as well as previously, but has not had the courtesy of a reply.

“The university authorities offered a space on the campus. There are many proposals out there. So many people want to see Lyric FM kept in Limerick. The cultural aspect is so important. Lyric FM has become the meat in the sandwich. There is to be a 100% staff cut.

“The workers are not sure whether they will be offered jobs in Cork or Dublin. This is supposed to be voluntary redundancy but the studio is being closed.

“My understanding is that a kiosk-type facility will be built for the regional correspondent. A studio will not be available if RTÉ, 2FM or anyone else comes to Limerick. That will be a huge disadvantage for Limerick and the region.”

“They have been there since 1999. The studio is the best state-of-the-art facility outside of Donnybrook. It is in the heart of Limerick city and houses the RTÉ regional studio and Lyric FM.

“Lyric FM has the lowest cost per hour of any RTÉ station. I would make the counterbalancing case that there is a strong argument for the decentralisation of other arms of RTÉ, such as 2FM, to the Lyric FM studio in Limerick.

“A large amount of capacity is available and the livelihoods of 23 people are at stake.”