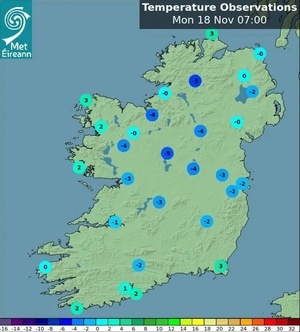 Counties Tyrone and Roscommon were Ireland’s coldest locations overnight with mercury levels dropping to minus 5 Celsius at the Met Éireann stations.

The air temperatures at Castlederg (Tyrone) and Mount Dillon (Roscommon) were the lowest recorded in Ireland since February.

If It’s Any Consolation