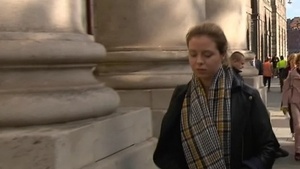 Tadgh Kennedy, on behalf of SOUND (Sufferers Of Unique Narcolepsy Disorder), spoke to Dr Gavin Jennings, in light of the settlement reached by Aoife Bennett, 26, who developed narcolepsy shortly after receiving the Pandemrix swine flu vaccine ten years ago.

The defendants in Ms Bennett’s case were GlaxoSmithKline Biologicals, the Health Service Executive, the Minister for Health and the Health Products Regulatory Authority, formerly the Irish Medicines Board.

Mr Kennedy told Dr Jennings that his son Jack, who is now 16, got the same vaccine on the same day as Ms Bennet.

He said that his son is now a “very heavily medicated young man” and will continue to be for the rest of his life.

“Personally I would say that I heard what I needed to hear on the first couple of days in court. We heard, the opening statement, that laid out the case, that Pandemrix was not a properly clinically trialed drug. And it was used on healthy population in this country.

“It had devastating effects on people. The management of the case then, when these reports were coming in about the adverse effects, it was totally mismanaged which is what we’ve always maintained.

“And the State then was just really, really, really painstakingly slow to react or do anything about it. And even after diagnosis, and over the years, they’ve been very reluctantly, grudgingly giving anything to anybody that’s suffers anything to do with narcolepsy…”

“It’s so haphazard, ad-hoc, that’s the painful bit about it for a lot of people. It’s just a mess, it’s totally mismanaged and I think that was the crux of seeking responsibility and liability in Aoife and our cases, going into these court cases.”

Asked if he would proceed with a case himself, he said he presumes that his son is still on “the list to go ahead”.

But he said it’s up to the Government now and complained that it has spent millions fighting these cases “aggressively”.

He questioned why the Irish system is fighting the cases when the company GSK has settled cases in other countries.

Yesterday: “The Cost To The State Of This Action Alone Can Be Measured In Millions”