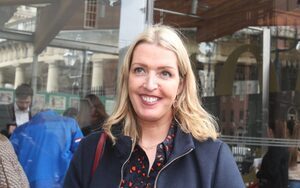 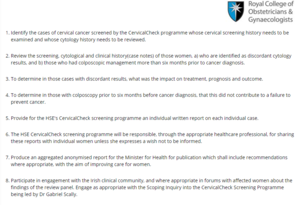 Her return came in the wake of the Royal College of Obstetricians and Gynaecologists’ review of CervicalCheck slides on Tuesday which found that in 159 cases there were missed opportunities to prevent or diagnose cancer earlier.

It also followed Lorraine Walsh’s announcement that she had resigned from the CervicalCheck steering committee.

“I have decided to reactivate my Twitter account for a very brief period in order to express my views on the RCOG Review process.

I fully support Lorraine Walsh’s decision to step down from the Cervical Check steering committee.

The RCOG review was established to examine the individual histories of women who had been through the CervicalCheck screening system and who had developed cervical cancer and to determine, in cases where results were discordant, what was the impact on treatment, prognosis and outcome.

It is notable that the focus yesterday by Government was on RCOG’s endorsement of the screening programme RATHER than on the impact of the findings for those women and families, which was ACTUALLY the purpose of the review. Lorraine bravely outlined her experience on RTÉ’s Prime Time.

To reiterate: Lorraine’s experience of the RCOG Review was, as follows Lorraine was first told that her slides could not be traced, she was then given a set of results even though her slides supposedly didn’t exist and, 24 hours later, was presented with a new report with entirely different results.

On further investigation, she found that labelling had been removed from both her slides and mine and our slides were subsequently mislabelled.

These events do NOT instil confidence in the RCOG process. Lorraine stood down from the CervicalCheck Steering Committee accordingly, a decision I wholeheartedly agree with.

Lorraine’s decision was based on an unwavering commitment to the women and families of the 221+ group, a group that Lorraine helped found and which she has dedicated the past 12 months of her life helping women and families caught up in this debacle.

Lorraine has requested that each woman be given the option of getting individual independent reviews of their smear screening, cytological and clinical history. This is the only way to conclusively give peace of mind to the women and families affected.

This is an essential step to ensure that lingering concerns about past failures in CervicalCheck do NOT undermine future confidence in the screening programme, a programme we both want to restore trust in.”

Earlier: ‘Where Is The Future For Cervical Screening?’

5 thoughts on “A Trust Issue”