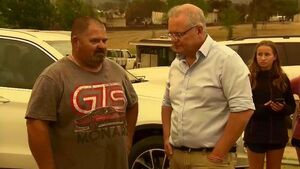 Australia’s version of BoJo, ScoMo [Prime Minister Scott Morrison, top right], gets the reception he deserves in a town hit by the bush fires: ScoMo has been more interested in the cricket and his holiday in Hawaii than in supporting the people affected by the fires…

Attack Of The Giant Marlin